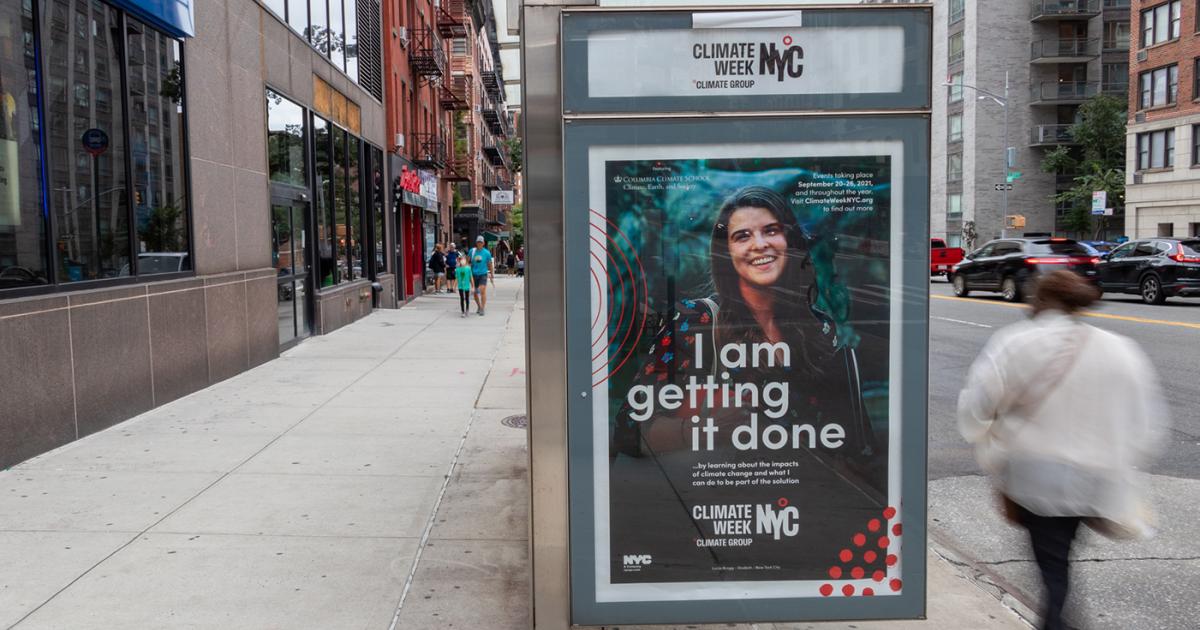 Climate Week officially ended Sunday. Similar to Earth Day/Week, it is a time when companies make a lot of climate-related announcements and speakers offer their insights during speeches and panel discussions. (Historically, the events also happen alongside the United Nations General Assembly, where climate is a central agenda item.)

Referring to Climate Week, Bill McKibben, co-founder of the grassroots climate campaign 350.org, last week wrote in The New Yorker: “I’m glad that it’s happening, but, as with the endless annual global climate negotiations (this year’s will be in November, in Glasgow), there’s a danger that we’ll come to think of the climate crisis as a standard piece of our mental furniture and as not what it actually is: a time-bound emergency that must be tackled full on, right now.”

Indeed, the impacts of climate change are already here and with that in mind, the theme for this year’s Climate Week — “getting it done” — feels particularly relevant. Getting it done means taking the radical, urgent action that the most recent IPCC report has called for and operating differently from the current status quo. One way to do that is through ensuring a just transition.

“When I’m thinking about a just transition, it’s recognizing that a lot of the values behind how we operate today are rooted in colonialism. It’s a colonized mindset where we’ve literally commodified people and our places and resources, and our land,” said Gloria Walton, president and CEO of The Solutions Project, during the Climate Week opening ceremony.

Walton noted that this mindset has generated mass consumption, mass production, mass waste and profit at any cost. “We really need to shift away from those outdated values and start thinking about what it means to be sustainable, to be thinking about today as much as we think about tomorrow,” she said.

Given that mindset, of the dozens of declarations and commitments that landed in my inbox last week, there are some that stood out. In no particular order, here are eight initiatives from governments, investors and companies that, if executed quickly, will help get it done.

During the U.N. General Assembly, President Joe Biden pledged double the federal government’s financial support to help low-income countries tackle the climate crisis. The proposed $11 billion in annual climate funding — increased from the initial $5.7 billion announced in April — will need to be approved by Congress, according to Quartz.

“We must make sure that our investments at home and abroad will help us achieve our mitigation goals, enable a sustainable economic recovery and strengthen resilience against the impacts of climate change,” said Lisa Jacobson, president of the Business Council for Sustainable Energy, in a statement.

The announcement, along with China’s pledge not to finance any new coal plants, is providing new optimism about the COP26 proceedings next month.

More than 100 beauty and wellness brands that represent all sectors of the $500 billion beauty industry joined together to encourage people to advocate for climate policy from lawmakers through CodeRed4Climate.

The initiative was developed by skincare company Versed, in partnership with fellow skincare company Youth To The People and Call4Climate, a project of nonprofit media lab Fossil Free Media. In addition to pushing people to call their Congress members, the companies wrote an open letter addressed to senators and representatives. Signatories include other beauty companies including e.l.f. Cosmetics, Common Heir, Milk Makeup, Hanahana Beauty and Summer Fridays.

“As business leaders, employers, community members and parents, we join you in caring deeply about the future human and economic well-being of our great country,” they wrote. “But it’s not enough to care.”

As my colleague Sarah Golden noted in her newsletter last week, corporate climate advocacy has been far too silent. “They can’t be on the right side of climate history and be part of organizations fighting our best chance of climate legislation,” she wrote. It’s important that some are speaking up.

The World Economic Forum launched a platform, developed in collaboration with Accenture, that contains “more than 200 leading practices and case studies to boost sustainability and reduce emissions in cities.”

“Decarbonization solutions already exist — we don’t need to wait for the next big innovation. This platform provides examples of policies and business models that have been used successfully around the world. We are starting with 200 solutions and expect to have many more over the course of the next year,” said Kristen Panerali, head of energy, materials and infrastructure program, net-zero carbon cities at World Economic Forum, in a statement.

The United Nations projects that 68 percent of the world population will live in urban areas by 2050, so cities have a crucial role to play as the world races to reach net-zero emissions in the next 29 years. This sort of shared knowledge platform puts planners one step closer to get that done.

“These transformative projects are a win-win — delivering thousands of new good-paying jobs throughout the state and attracting billions of dollars in private investment,” Hochul told SILive. ”They also help us turn the page on New York City’s long-standing dependence on fossil fuels and will ensure millions of New Yorkers, especially those living in our most vulnerable communities, can have the promise of cleaner air and a healthier future.”

It’s estimated that the projects will reduce the city’s greenhouse gas emissions by 77 million metric tons over the next 15 years, create 10,000 jobs and bring $8.2 billion in economic development investments to the state.

New York is vying with California when it comes to climate leadership, and its actions stand as a model for other states. “We’re not content to be nation-leading any more. We want to be global leading and that means setting even more ambitious goals,” said Hochul during the Climate Week opening ceremony.

That’s the amount of money nine philanthropic organizations pledged over the next decade “to support the creation and expansion of protected areas, sustainable management of the world’s oceans and Indigenous-led conservation.”

The money for the Protecting Our Planet Challenge is coming from the Bezos Earth Fund, Arcadia, Bloomberg Philanthropies, the Gordon and Betty Moore Foundation, Nia Tero, Rainforest Trust, Re:wild, Wyss Foundation and the Rob and Melani Walton Foundation. It will support the “30 by 30” initiative, a global goal to protect 30 percent of the planet by 2030. A statement about the pledge noted that this is the largest private funding commitment to biodiversity conservation.

“Today’s announcements show that the world is converging around the need to reverse the loss of nature and is beginning to mobilize funds at scale,” said Marco Lambertini, director-general of the World Wide Fund for Nature, in a statement that pointed to analysis from the Paulson Institute that suggests that between $722 billion and $967 billion needs to be spent each year over the next 10 years to reverse the decline in biodiversity by 2030.

Chief financial officers from 60 companies announced a commitment to collectively invest more than $500 billion over the next five years towards the Sustainable Development Goals. The execs — from a range of companies — are part of the CFO Taskforce of the United Nations Global Compact.

“With this commitment, we set a necessary milestone on a journey which began in December 2019 when a small group of CFOs started working together towards a vision of boosting the integration of sustainability within business operations,” said Alberto De Paoli, CFO of Enel and co-chair of CFO Taskforce, who spoke during the Uniting Business LIVE event, where the commitment was announced. “Now, we aim to increase awareness even further and help create the necessary environment to attract more capital towards sustainable development.”

The taskforce is working to recruit hundreds of U.N. Global Compact participating companies to scale up the amount of corporate investment aligned to sustainability goals and outcomes. With that in mind, it expects this initial monetary commitment to increase over time.

7. Salesforce declares it is a net-zero company

The declaration applies across its full value chain — Scope 1, 2 and 3 — and Salesforce said that it has achieved 100 percent renewable energy for its operations. It noted that it achieved this goal by doing the following:

The company also launched Sustainability Cloud 2.0, a platform designed to help other companies get to net zero more quickly.

“We’ve committed to creating a net positive impact on climate,” said Roma McCaig, senior vice president of impact and communications, Clif Bar & Company, in a statement about the announcements. “That’s why we’re leveraging Salesforce’s Sustainability Cloud to further enhance visibility into our carbon footprint while also helping our suppliers reduce their own.”

In April, Salesforce notified its suppliers that all future procurement contracts will include language that requires them to set science-based targets to reduce their greenhouse gas emissions. And considering the software company’s influence with big businesses — it’s used by more than 80 percent of the Fortune 500, for example — its maturing Sustainability Cloud offering can be a push in the right direction.

The company described the program as an invitation “for our suppliers to position themselves on the leading edge of our  planet  goals  and to demonstrate their shared values and commitment to reducing the greenhouse gas (GHG) footprint of their value chains.”

The mammoth company is encouraging its key suppliers with the most significant impact on climate globally to do three things: Set a public climate target to halve absolute GHG emissions by 2030; publicly report progress towards meeting this target; and share greenhouse gas emissions/footprint data with Unilever.

In a World Economic Forum article, Unilever Chief Procurement Officer Dave Ingram noted that the company sources from over 56,000 suppliers. “We have, therefore, developed an encompassing approach to cover our entire upstream value chain and identified where we needed to focus our efforts for maximum impact,” Ingram wrote.

Samsung launches new Galaxy S23 smartphone lineup with improved camera, gaming capabilities
From the archive: support for Darwin, and a metallic standard
How mummies were prepared: Ancient Egyptian pots spill secrets
What Your Brain Is Like With A Concussion
Sanctions on Russian crude oil have ‘failed completely,’ oil analyst says