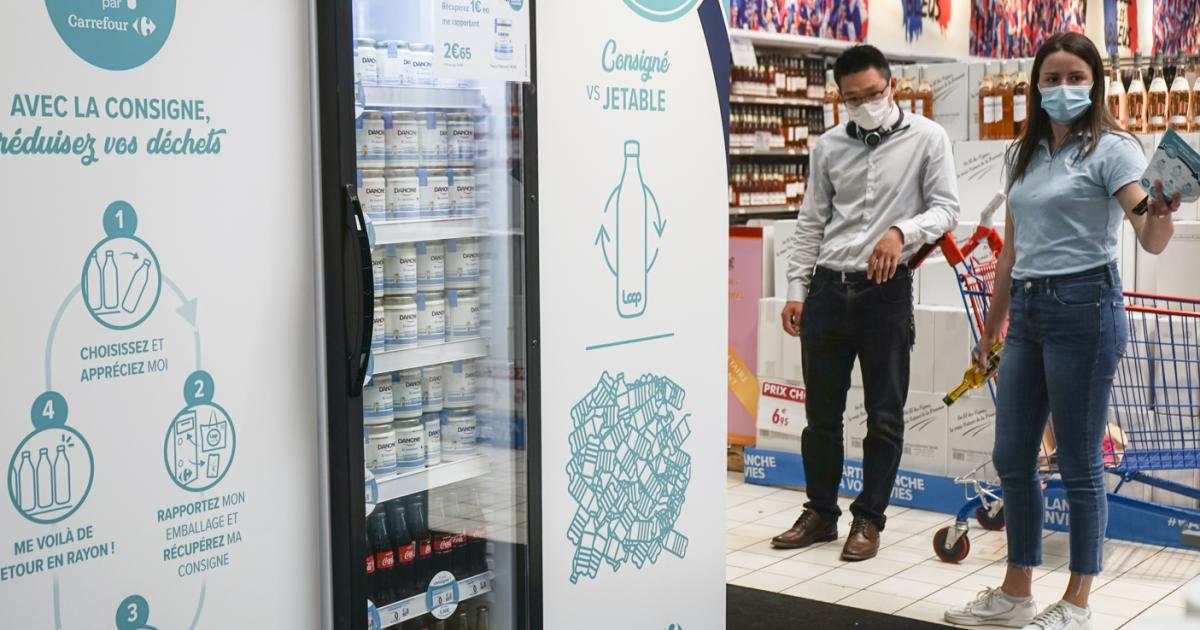 When TerraCycle launched Loop — its e-commerce service featuring goods packaged in reusable containers — two years ago during the World Economic Forum in Davos, the plan was always to eventually include physical retail locations in the mix.

“Our goal is [to] make reuse as big as possible,” said Tom Szaky, CEO of TerraCycle, during a conversation ahead of the announcement.

In other parts of the world, Loop has partnered with Carrefour (France), Aeon (Japan), Tesco and McDonald’s (United Kingdom) and Woolworths (Australia).

For context, when the service started with reusables sent to customers’ homes via UPS, it was in two markets: Ile-de-France, a part of the country that surrounds Paris, and the New York region, which included parts of New Jersey and Pennsylvania. The expansion allows users to purchase products in reusable containers at physical retail locations — and return the packaging in person once it’s empty. (Items purchased online cannot be returned in person.)

The expansion has already started for some of its partners. On Sept. 13, Tesco launched its in-store Loop service in 10 of its more than 3,000 stores, after a yearlong pilot that launched in July 2020. By the first quarter of 2022, there will be in-store services in about 200 locations across Loop’s partner companies.

“With 88 everyday products available, we’re giving customers a wide range of options, and we’ll learn as much as we can from this to inform our future packaging plans,” said Tesco Group CEO Ken Murphy in a press release about the launch.

Szaky said that other in-store rollouts will happen over the next month.

During our recent conversation, Szaky picked up a reusable McDonald’s coffee cup sitting on his desk. He noted that a customer could buy that cup at McDonald’s and then drop it off at Tesco. Alternatively, someone could go to Tesco and buy laundry detergent or tomato ketchup and then drop the empty container off at McDonald’s.

“As more retailers come up, that really strengthens to create that network where you can effectively have a disposable experience but act reusable,” he said.

Partner stores and restaurants have bins for container drop off. As Loop has grown, Szaky said it has been building infrastructure to support the logistics of collecting, cleaning and sorting its reusable containers.

Szaky described its infrastructure as sets of major nodes and micro nodes. A minor node is where all the used containers are checked in and sorted. And he said that every participating city gets a minor node. Those all feed into the major node, where the cleaning gets done.

Loop plans to continue adding to this network of nodes. It thinks that in the U.S., it will need a total of five major nodes and 100 to 200 minor nodes. Szaky said that right now the company has one major node in the U.S., as it does in every other country where it has a partnership.

As partners expand the locations in which they offer Loop services in new cities, the company will add minor nodes there.

For the customer side of the equation, Loop has historically worked with a deposit system, where consumers pay a fee for the reusable packaging. When a container is empty and they return it, customers can choose whether they want that product replenished; if not, their deposit is credited to their account and returned, upon request. A similar system is in place with the in-person expansion via a mobile app, and each retailer or restaurant charges a different deposit for the packaging. The deposit for the McDonald’s coffee cup, for example, is $1. At McDonald’s, a regular cup of coffee costs about $1 on its own. Deposits on other items in the Loop ecosystem range from 15 cents for a Coca-Cola bottle to $10 for a Clorox wipes package.

Some retailers are also offering reusable tote bags — also available with a deposit — for customers to use for returning packaging to the store.

In the years since the launch, Loop has continued to be reminded that consumers want convenience. With that in mind, as a 2020 GreenBiz headline noted, “Stores are essential for the Loop reusable packaging program.”

To achieve its goal of making reuse as big as possible, the service has to be available to — and appeal to — more individuals than the Loop customer of February 2020, who skewed high-end or eco-conscious.

Szaky said that in the years of analyzing the reuse movement, Loop decided it wanted to go the way of “prefill,” where customers can return an empty reusable package and purchase another package that is filled with the product, because it believed this was the most stable opportunity for reuse.

We needed a platform that solves, that effectively creates an ecosystem of ‘buy anywhere, return anywhere’ and that at any brand can then play on top of the ecosystem.

For Loop, having a network of retailers that can take back reusable containers regardless of the origin and that can also offer new goods is also important. Szaky pointed to the example of having to take back a propane tank to a propane store and not being able to return it elsewhere. That model is limiting.

“We needed a platform that solves, that effectively creates an ecosystem of ‘buy anywhere, return anywhere’ and that at any brand can then play on top of the ecosystem. And any retailer can also do the same,” Szaky said.

“That is the recipe for scaling this thing.”

In the long term, the company plans to close the consumer pilot e-commerce sites as it scales up the in-store version of its service.

In addition to managing its Loop platform, TerraCycle partners with companies in another way: recycling packaging that cannot be put into curbside bins, instead collecting it through store drop off and mail-in initiatives. It handles a plethora of items — such as the plastic pouches used for Arm & Hammer and OxiClean detergent pods, thin plastic bags that enclose Bimbo Bakeries USA bread and bakery goods, and items from numerous beauty brands that offer goods in various types of packaging, including aerosol cans, shampoo bottles and mascara tubes. The company recently faced scrutiny for this work. In March 2020, Greenpeace filed a lawsuit against TerraCycle that alleges that it — along with its biggest corporate partners — was greenwashing and not telling the full truth about the recyclability of its packaging.