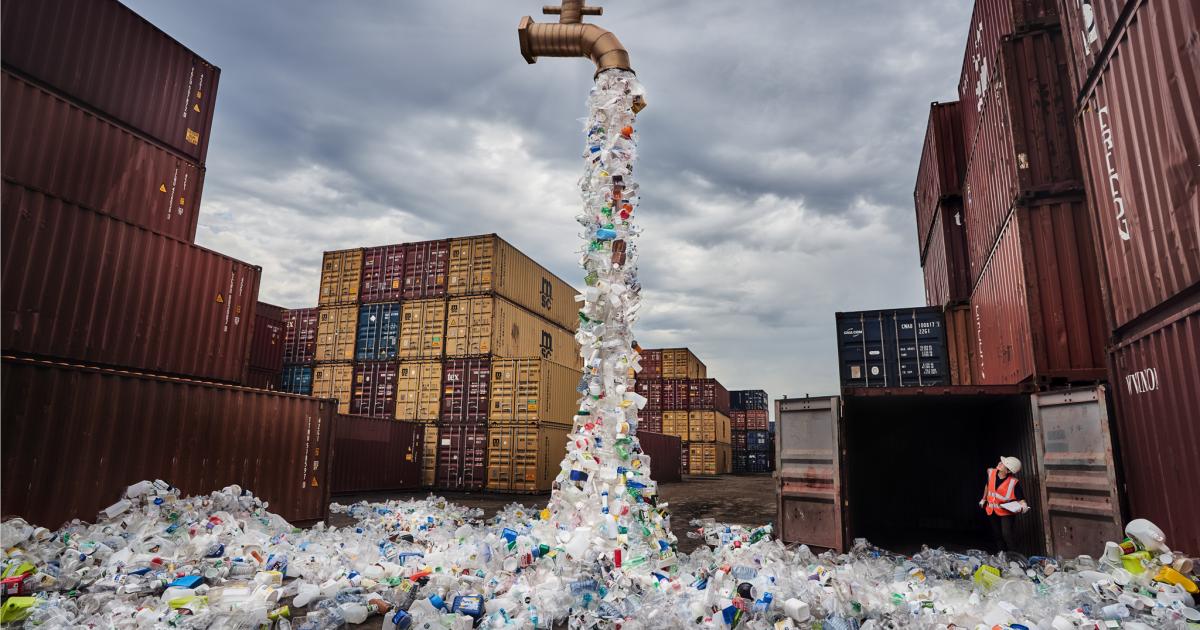 Picture this: To wind down from a long week, you decide to draw yourself a relaxing bath. You plug the drain and turn on the faucet. As the tub fills, you go to make a cup of tea, grab a magazine and light some candles (or whatever you’re into). But when you return to the bathroom, you find the water has begun to overflow, cascading down the side of your tub and pouring across your floor.

What do you do next? Do you grab some towels to sop up the growing puddle? Open the plug to let the water begin to drain from the tub? Or do you throw in a bath bomb and climb right in?

I think it’s safe to say that in this scenario, everyone would start by turning off the tap (perhaps after uttering a few profanities). But this simple visual of an overflowing tub has become a go-to metaphor to call attention to the insufficient approaches many are taking to address the plastics waste problem. I’m sure you’ve heard it before.

While some industries and institutions might focus exclusively on the symptoms of the plastics problem (addressing the impacts of plastic flowing into communities, ecosystems and oceans and emphasizing reactive strategies), the idea of “turning off the tap on plastics” has become shorthand for solutions that address the root causes of pollution.

We’ve gone over our quota of what the world can actually handle, and there are no signs that we’re putting on the brakes.

“This is a sentence that I’ve heard over and over in the plastics world, but it’s one that I haven’t ever seen represented properly in a way that was compelling,” Von Wong told me. “I wondered, could I transform a phrase into a visual symbol?”

The result: a three-story monstrosity of an actual plastics tap.

Over months, Von Wong designed, constructed and photographed an eerie and towering golden spigot from which a torrent of bottles, jugs and bins appear to pour uncontrollably into the surrounding environment. Having erected and photographed the tap in various landscapes, Von Wong aims to raise public awareness around the global plastics problem and visually represent the urgent need for systemic solutions. “I want to bring the phrase plastics tap into the public lexicon,” Von Wong told me.

The installation, funded by the Embassy of Canada in France, is made up of an actual 16-foot box truck full of used plastic bottles that Von Wong and volunteers collected in Montreal. To make the sofa-sized faucet, Von Wong scavenged over 200 pounds of ventilation duct from a building scheduled for demolition.

If you’re looking for 15 minutes of procrastinatory delight, take a look at Von Wong’s behind-the-scenes video of how he brought the project to life. It’s well worth a watch.

“Plastic is like coffee,” Von Wong told me. “It’s good in moderation and it has its use cases, but if that’s all you drink, all the time, every day, life would be pretty miserable. We’ve gone over our quota of what the world can actually handle, and there are no signs that we’re putting on the brakes.”

Von Wong is no stranger to the plastics waste problem. He is a creative adviser to the Ocean Plastics Leadership Network, was a judge at the recent Reusie awards and has built other enormous installations to call attention to symptoms of plastics pollution, such as the 168,000-straw Strawpocalypse that went viral on social media a few years ago.

When I asked Von Wong about his hopes for the plastics tap project, he told me, “I’m the art guy. I can’t solve this problem on my own. But I figured I’d start funneling the awareness that my work can bring to the people and organizations that are doing the work on the ground to hopefully create change.” Von Wong partnered with over a dozen environmental nonprofits including WWF, Oceana Global and Greenpeace to offer concrete opportunities for action alongside the photographs, rather than simply focus on raising awareness. Actions include advocating for a Global Plastics Treaty to President Joe Biden, calling on food service venues to reopen with reuse and taking a plastics audit, among others.

Even for practitioners that spend long workweeks addressing pieces of the larger plastics pollution puzzle, it’s easy to let impersonal statistics and figures go in one ear and flow right out the other. Projects such as Von Wong’s draw us back in, reminding us what we’re actually solving for. I think author Toni Cade Bambara put it best: “The role of the artist is to make the revolution irresistible.”