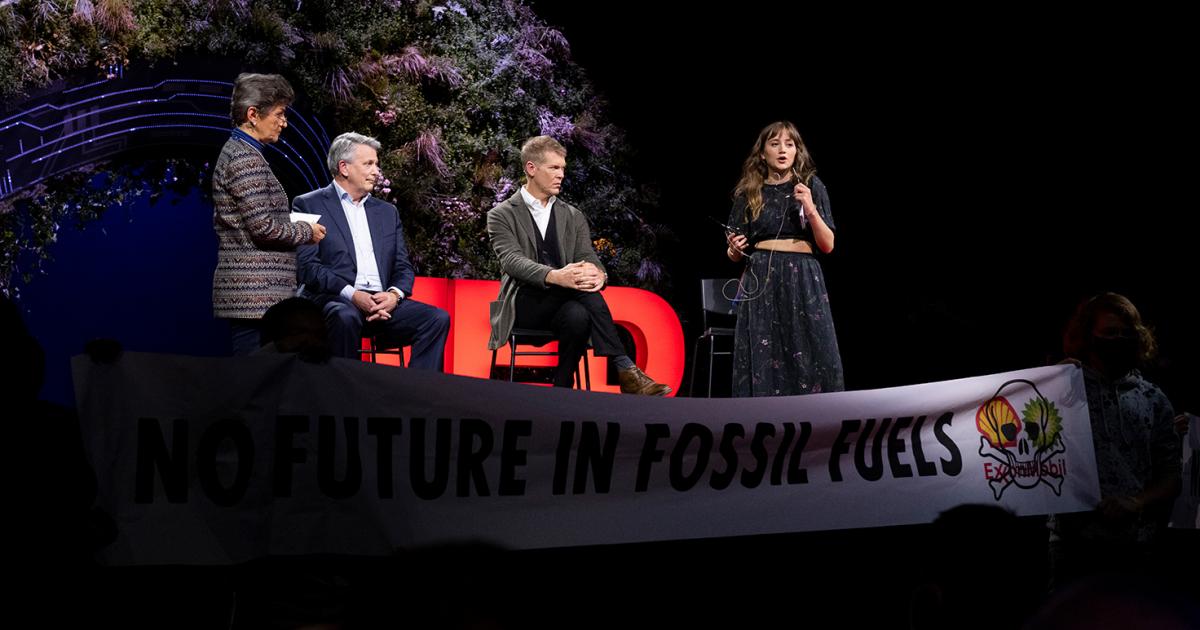 Disclosure: My transportation and boarding during the TED Countdown event was paid for by philanthropic donations to TED.

What does it look like for a CEO of an oil company — or really any company that contributes greatly to climate change — to be held accountable?

The TED Countdown conference this week offered one potential answer to the question. During the event, Lauren MacDonald, a Scottish climate justice activist, joined Ben van Beurden, CEO of Royal Dutch Shell, and Chris James, co-founder of impact investment group Engine No. 1, on stage for a conversation.

“I just want to start by saying that you should be absolutely ashamed of yourself for the devastation that you have caused to communities all over the world,” MacDonald said to van Beurden during the panel. “You are responsible for so much death and suffering. I’m not even going to appeal to you to change because I know that that would be a wasted opportunity.”

The conversation wasn’t originally part of the program, but climate justice activists pushed event organizers to include more voices in the conversation that initially only included van Beurden.

“Having Lauren MacDonald, a member of the StopCambo campaign, on the stage was critical to the discussion of the oil industry’s impact on the planet and communities,” said Lindsay Levin, co-founder of Countdown and CEO of Leaders’ Quest, a nonprofit focused on helping companies “align profit with purpose,” in response to emailed questions for this story. “We hope this will spark more opportunities for new kinds of dialogue to hold this industry accountable.”

StopCambo’s goal is to stop the United Kingdom government from drilling new oil from the North Sea, near the coast of Shetland.

On stage, the panel was framed as an opportunity for each of the speakers to share their “strategies of engagement with the accelerating of the energy transition.” Christiana Figueres, a founder of the Global Optimism group and a figure central to negotiating the Paris Agreement who was moderating the conversation, called on van Beurden to share first.

(The full conversation can be viewed on the TED blog here.)

During his remarks, van Beurden said that while Shell has shared a strategy to become a net-zero company by 2050, producing oil and gas is still part of the company’s mission because “the world still uses oil and gas.”

The CEO noted that Shell’s approach to the energy transition is by using its legacy business — oil and gas — to fund its renewable energy efforts.

“That does not mean that we want to hold on to [the legacy business],” he said.

But the question looms: How long can Shell hold on to that work, which wreaks havoc on the earth, before it’s too late?

The most recent Intergovernmental Panel on Climate Change report shows that inaction from governments and companies is no longer an option. On the TED stage, there was a push for Shell to be more aggressive in its climate strategy.

“This is not an abstract issue, and you are directly responsible for those deaths,” MacDonald said during her response to van Beurden, pointing to deaths related to impacts of the climate crisis, such as pollution, extreme heat, and weather-related disasters. “If you’re going to sit here and say you clearly care about climate action, why are you currently appealing the recent court ruling that Shell must decrease its emissions by 45 percent by 2030?”

After her remarks, MacDonald left the stage to join protesters outside of the venue. The tension in the event space was palpable.

And throughout the event, the sentiment that MacDonald brought to the stage was part of other discussions — some in breakout sessions and during more informal conversations amongst attendees and others that were also on stage.

Near the end of the event, climate activists Xiye Bastida and Shiv Soin shared a list of demands that they and other youth developed during the course of the week (pictured above).

Elsewhere — on stage with Patricia Espinosa, executive secretary of the U.N. Framework Convention on Climate Change, and Gonzalo Muñoz, who was nominated by the Chilean presidency and the United Nations as the High-Level Climate Champion for COP25 — Laurence Tubiana, CEO of the European Climate Foundation, shared her hopes for what comes out of COP26.

First, Tubiana said, “Tell the truth. We are not there [on addressing the impacts of climate change]. Be transparent. Be honest. Honesty is a condition for trust and for hope. … Really show your cards, get your data, display what you will be doing, plans for — not 2050 but 2030 and immediately.”

Tubiana also pointed to the need for activism. “We need to accelerate now. We need to review these climate plans every moment, not wait [until] 2023 or 2025. It’s now,” she said. “We have to be serious.”

Let’s see what happens at COP26.

Sam Bankman-Fried tried to influence witness through Signal, DOJ alleges
A chilli’s wrinkles and a cherry’s dimples explained
Episode 348: How Shopify shops for carbon removal tech
Norway’s fossil fuel bonanza stokes impassioned debate about how best to spend its ‘war profits’
Smartphone shipments plunge to a low not seen since 2013 — their largest ever decline