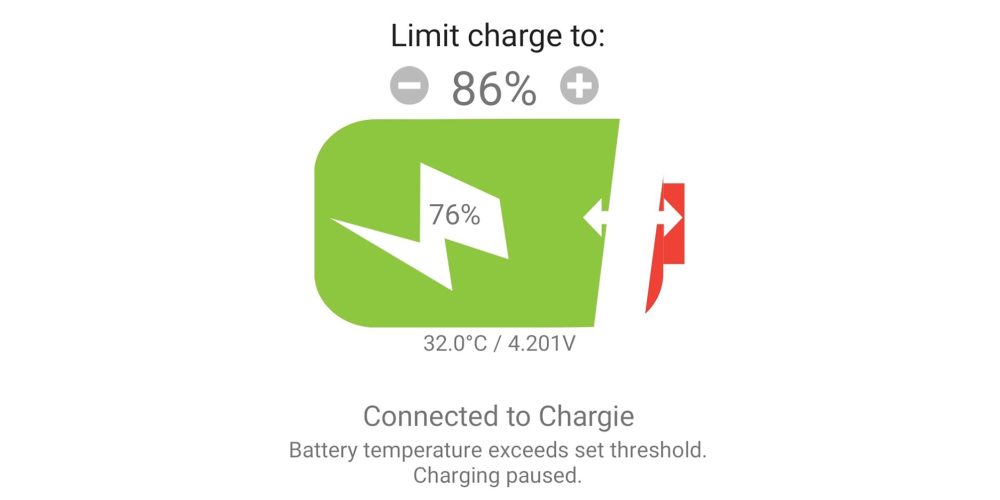 Electric cars come with intelligent charge management designed to protect batteries from over-heating and excessive wear. Chargie is a smart device which brings that same intelligence to your overnight phone charging – and best of all, it works with all of your existing chargers.

Using Chargie protects your battery, and can delay significant degradation from just one year to around five years …

Smartphones use the same battery tech as electric cars, namely lithium-ion. These batteries are highly efficient, packing a lot of power into a small space, but need careful charge-management to give them the longest possible life.

Lithium-ion batteries can be damaged in one of two ways. The first is completely depleting them. If you frequently run a battery down to zero power, that will significantly shorten its life.

The second is by keeping them at 100% for a long time – which is something that will easily happen every night.

While electric cars have efficient cooling mechanisms, manufacturers still recommend you do not exceed the 20 to 80% thresholds, to keep them from overheating. If you still continue to sip energy from a depleted battery, it will heat up even more, which will make the cooling system work harder using energy from the same battery, causing avalanche consumption. Eventually, the car will plainly die on you and will limit traction power, just like your phone will limit performance, which leads to undesirable situations.

Smartphones cannot cool as efficiently as cars, especially when kept in your pocket with a plastic protection case all over. They’re also designed to perform within their factory parameters for about a year, despite the fact that the hardware is more than capable of four-year lifespans (especially Apple devices). Warranty may not apply to 85% battery capacity, although performance will be severely limited by that time.

You can charge your Tesla up to 80%, for example, and only top it up when you really need the extra range, but generally, drivers avoid charging to 100% most of the time.

Smartphone batteries should be treated the same way – but most chargers don’t have those kind of smarts.

That’s why Apple, for example, says that your battery is only designed to retain 80% of its original capacity after 500 cycles. Given that the average person now keeps their smartphone for three years plus, that means you can have severely degraded performance for much of that time.

Their approach since iOS13 charges to 80% for the first leg and then waits until right before your usual wake up time and pumps the last 20%. The thing is it doesn’t always work, since many people have varied schedules and the function is completely automatic and tries to learn from your habits – most of the time unsuccessfully.

This is where Chargie comes in.

Chargie is a small device you fit between your charger’s power brick and your charger cable.

It links by Bluetooth to an app on your phone.

You can then set the percentage you want to charge to manually, just like you do in your Tesla.

Or you can schedule your device to be topped up manually, at a time you know precisely. For example, you can keep your phone at 50% throughout the night (much better for the battery) and top it up to 90% or whatever level you find suited for the next day, thus completely avoiding high charging states and using the two-step charging process. Even if you need 100%, it’s much better doing it this way than plainly keeping it charged at that level for the entire night.

Not only can you protect smartphone batteries with this gadget, but all sorts of other “dumb” devices you may have: flashlights, older GPS navigators, Bluetooth speakers, wireless headphones, smartwatches, and more. Most of them have no smart charging limits at all and can spend days or even weeks with batteries that are 100% charged, which leads to much lower battery life. Chargie can also be used with basic lithium-ion applications created by hobbyists and makers.

Chargie protects the environment, as well as your wallet

By extending the usable life of your battery, Chargie saves you the hassle and expense of replacing your smartphone battery.

That doesn’t just save you money, though – it also helps the environment. Batteries use rare minerals which need to be mined, and also create an e-waste problem when it is time to dispose of them. Chargie reduces or eliminates battery replacements, so is kind to the planet.

Chargie is also manufactured in an environmentally responsible way. The process is lead-free, and both the circuits and contacts are gold-plated to protect against oxidisation, prolonging the life of the device itself as well as your smartphone.

Chargie costs just $29.99, and you can use it with any of your existing chargers and charging cables. It’s compatible with any USB-A cable, with a USB-C one available for preorder here.

Use the code ‘electrek21’ for an additional 10% discount! Bulk-purchase discounts are also available.

Inmarsat-6 F2 satellite completes three-day trip to SpaceX launch site
Can changing your mindset change everything?
How Vegan Leather Is Made From Mangoes
Concerns about golden eagles are partly prompting the redesign of a Scottish wind farm
How (and Why) to Find Your Life’s Purpose