In the first part of this series, I projected and explained the plummeting hydrogen demand from petroleum refining and fertilizer, the biggest sources of demand today, through 2100. In the second part, I explored the flat demand segments, and the single source of significant demand increase I see for hydrogen in the next 20 years. In this final assessment, I look at the great but false hopes for a hydrogen economy: transportation, long-term storage, and heat. Hydrogen demand through 2100, by author.

This is one of the great hopes of the current fossil fuel industry, and a couple of car companies which have managed to capture their governments in Korea and Japan. However, there’s no significant place for hydrogen or synthetic fuels made from it in ground transportation. Electrification is simply too easy, prevalent, cheap, and effective. Hydrogen can’t compete outside of tiny niches like vintage vehicles. For short- and medium-haul aviation, and short- and medium-haul water freight shipping, the clear path is battery electric as well.

His perspective on shipping was that we needed to eliminate black carbon, with its 100-year global warming potential of 1,055–2,240. Subsequently, I spent a couple of hours talking with Hadi Akbari, a PhD of mechanical engineering who has spent the last several years of his fascinating career spanning two continents building scrubbers for heavy marine vessels. Just as particulates are scrubbed from coal plant emissions, they can be scrubbed from marine emissions, and so biofuels with their lower black carbon emissions will be fit for purpose in my opinion. (Note: this is my opinion after talking with Hadi and researching further, not Hadi’s expressed opinion.) Biofuels use nature to do most of the heavy lifting and have advanced substantially over the past decade. There is no value in using them in ground transportation, they no longer consume food sources and there is little real concern about them competing with agriculture, although there is a lot of expressed concern nonetheless.

On aviation, Jacobson rightly points out that we have to solve emissions, but it’s a hard problem, with CO2 emissions, nitrous oxide emissions (anything burned in our atmosphere combines the nitrogen and oxygen into nitrous oxides), and the water vapor which creates contrails. In discussion with Paul Martin, it’s clear that both hydrogen storage and fuel cells would have to be in the fuselage, leaving a lot less room for passengers and luggage or making the fuselage bigger with attendant efficiency losses, and creating a heavy burden of excess heat from the fuel cells that makes them deeply unlikely. In his perspective, hydrogen would be burned directly in jet engines in this model, and that wouldn’t eliminate nitrous oxides or water vapor hence contrails.

Once again, low-carbon biofuels are likely to be the solution here. Certified versions have existed since 2011, after all, while there are exactly zero certified hydrogen drive train planes in the world. And contrails require fairly minimal operational changes, as a regular CleanTechnica reader who holds my feet the fire pointed out (and thank you for doing so, Hazel). Those operational changes still have to be mandated for the airlines, but it’s not as significant a problem as I had originally assumed.

Biofuels are enhanced with some hydrogen in some cases, and there are always going to be edge cases where hydrogen persists, but my projection for all modes of transportation including biofuel use is still only an increase from effectively 0 tons today to a million tons a year by 2100.

Hydrogen is also projected as a solution for the dunkelflaute, long dreary periods when there is little wind or sunshine. However, it only makes into the also-ran categories of my projections for grid storage, not into the three major technologies. 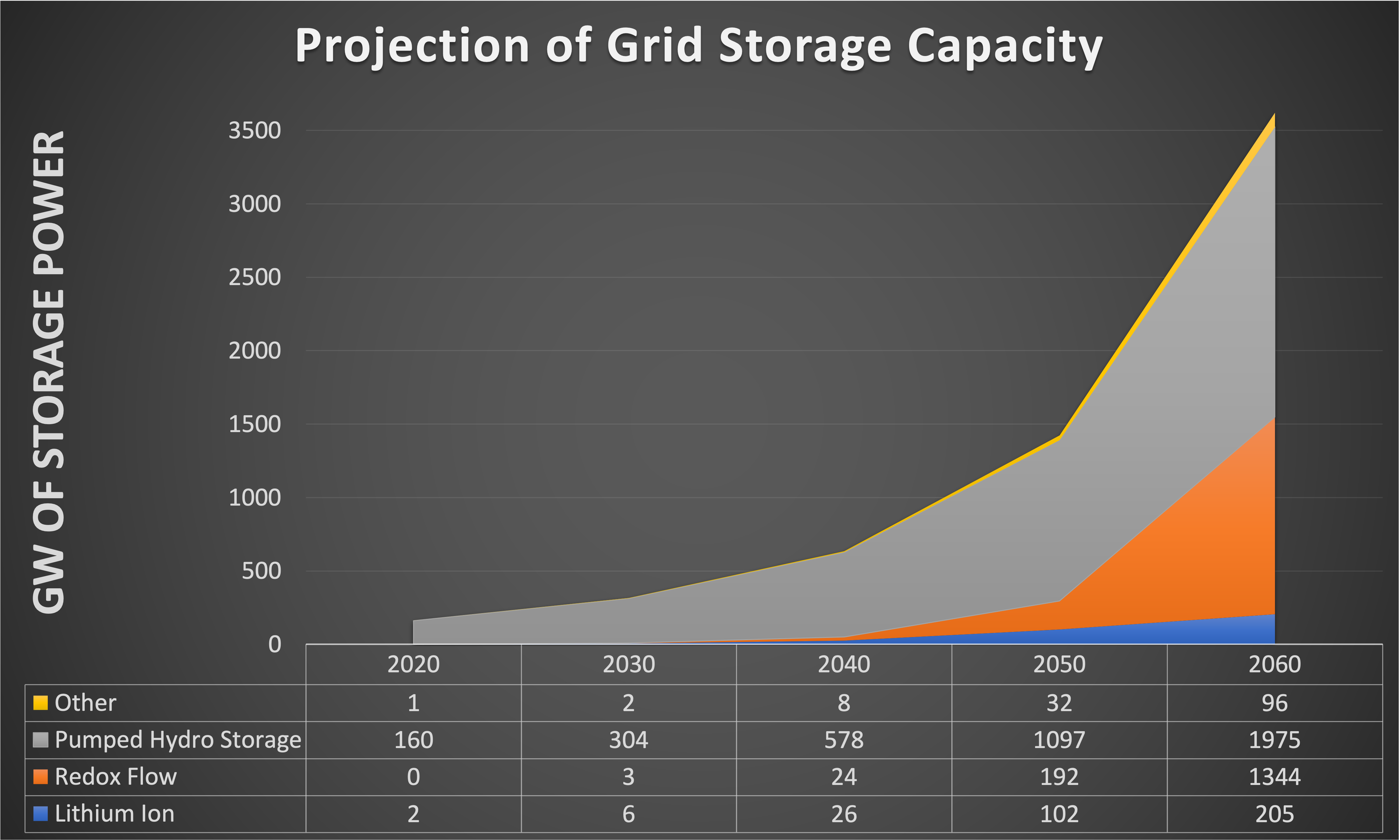 Even there, it’s not going to be a big player in the also ran category, fighting for scraps with all the other contenders a long way back in the pack. Some of the reasons are the same as always. It’s ineffective, it’s inefficient and it will be vastly more expensive. But more than that, the need just isn’t there unless you assume a whole bunch of other solutions aren’t already occurring.

High-voltage direct current (HVDC) transmission has been around since the 1950s, but in 2012 they finally solved a major technical inhibitor to its wide scale use. Despite the presence of multiple grids on continents already sharing electricity with HVDC asynchronous connections between high-voltage alternative current (HVAC) synchronized grids, despite massive HVDC construction projects under way, planned and proposed, despite electricity already being transmitted long-distances today with much more lossy HVAC, many people seem to think that electricity won’t be transmitted from renewables between opposing ends of continents and even across continents.

Electricity already flows from Africa to Europe across the Bosphorus Strait. Expanding that with big HVDC pipes from solar installations and wind farms in northern Africa is trivial, just as getting more HVDC pipes to ease the logjam from North Sea offshore wind into the population centers of Europe is straightforward and being constructed.

Renewables are cheap to build, and just as with every other form of electrical generation except nuclear, will be overbuilt and run under capacity part of the year. And the emergence of massive electrification increases the ability to do demand management at much larger scales.

The assumption of the need for long-term storage assumes narrow geographical boundaries, an archaic concept of energy independence in a world of global trade, and actively hostile neighbors. Liebreich and I have started this conversation online, with his opening salvo being a question of whether Japan would ever accept the proposed HVDC links with China, to which I respond now that China is already 20% of Japan’s annual trade, so why is electricity different?

Germany will likely be the one outlier in this space. They have underground salt deposits that they can turn into caverns, they have a weird love affair with hydrogen too, and dunkelflaute being a German word isn’t a coincidence. If anybody builds significant hydrogen storage, it will probably be them.

As a result, my projection for global demand for hydrogen for electricity storage rises from effectively zero tons today to a million tons in 2100. Someone will waste the money, but very few.

And finally, heating, the beloved hope of natural gas utilities globally, all of whom are lobbying hard to convince governments to let them ship hydrogen into homes and buildings to replace natural gas, and to allow them to inject tiny amounts of hydrogen into existing natural gas lines to produce close to zero emissions reductions.

There are no certified hydrogen home furnaces or stoves today. The existing natural gas distribution network would have to be completely replaced to handle hydrogen. Current challenges with leaking natural gas would be multiplied vastly by leaking hydrogen due to the tiny size of the molecule. SGN in Scotland is trying to retrofit 300 homes in Fife with hydrogen appliances for free, one of the many efforts going on around the world by utilities whose life is rapidly ending.

No, what will happen is that all of that natural gas distribution infrastructure will be shoved into electrical minimills to create steel for useful things, and the world will convert to heat pumps and induction stoves.

My projection for global demand for hydrogen for heating is effectively zero tons today, and remaining at so far under a million tons through 2100 that it rounds down to zero.

And so, that’s the projection. It’s flawed, of course, but not fatally in my opinion. It’s my first iteration of the projection, and it’s withstood me writing 4,000 words over three articles explaining it, so there’s that. But as with my projections on grid storage and vehicle-to-grid, I offer it to create a useful discussion about what the world will become, and welcome challenges to it.

Hydrogen demand today is two-thirds for petroleum refining and fertilizer manufacturing. Both of those uses are going to drop precipitously in the coming decades. The one growth area, steel, will not replace them, in my opinion. Green hydrogen only has to replace the useful two-thirds of hydrogen demand seen today, and grow to 75% of 2021 demand by 2100 to fulfill all needs.

How to Get Things Done by NOT Doing Them | Compilation
The DOJ’s antitrust case against Google is ambitious but risky
Canada Latest Weather Forecast: Widespread Travel Disruptions, Slower Commutes to Unfold in Southern Ontario Until Thursday Due to Intense Snow
The 3 Biggest Space Impacts Ever
Why is Red Meat … Red?