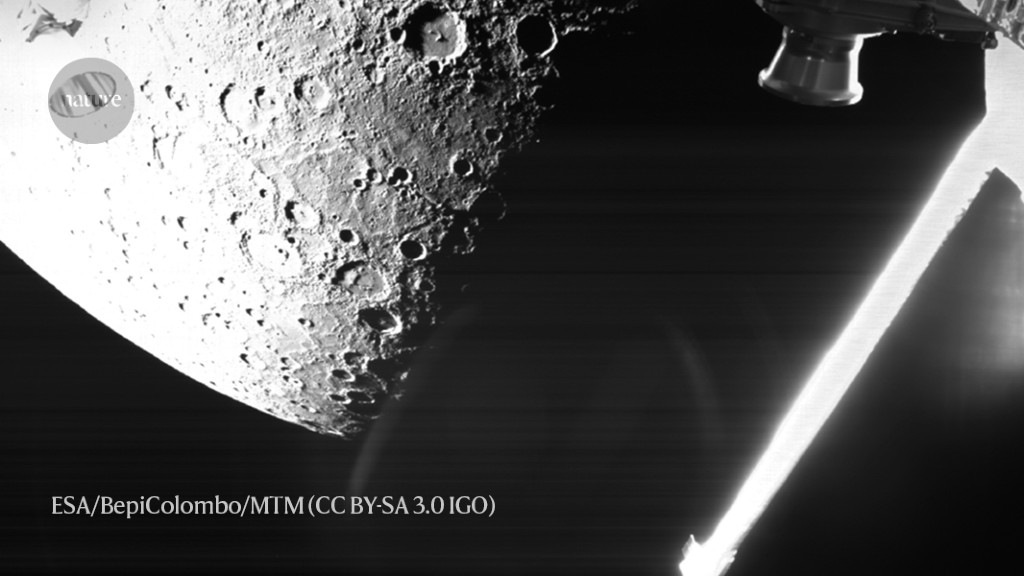 The European and Japanese BepiColombo mission has made its first fly-by of Mercury, passing just 199 kilometres above the planet’s surface at 23:34 UTC on 1 October.

It captured black-and-white pictures of Mercury’s crater-filled surface from a distance of about 1,000 kilometres; BepiColombo flew around Mercury’s nightside, so it was not able to take photographs at its closest approach. The shots were taken by auxiliary cameras at relatively low resolution, because the mission’s main cameras are tucked away during interplanetary travel.

The 4.1-tonne, €1.6-billion (US$1.85-billion) spacecraft launched in October 2018 and will enter permanent orbit around Mercury in 2025. It carries two probes, one built by the European Space Agency (ESA) and the other by the Japan Aerospace Exploration Agency (JAXA). The ESA probe will map Mercury’s surface and gravitational field to study its inner structure. The JAXA probe will look at Mercury’s magnetic field and its interaction with the solar wind. BepiColombo has already performed one fly-by at Earth and two at Venus, and this is the first of six it will make at Mercury. “The Mercury fly-by is special because Mercury is our target planet for our science investigations,” says project scientist Johannes Benkhoff, a planetary physicist at ESA in Noordwijk, the Netherlands.

Fly-bys are ‘gravity assist’ manoeuvres, which enable interplanetary ships to either gain or lose momentum and modify their orbits around the Sun without consuming large amounts of fuel. BepiColombo uses them to brake, so that it falls towards the inner Solar System. This way, the spacecraft will ultimately synchronize its trajectory with that of the innermost planet, Mercury, so it can enter orbit. Some of the two probes’ instruments, in particular the on-board magnetometers, collect data during the fly-bys, says Benkhoff. This could enable the team to start getting its first science results.

Once in orbit, a major focus for the craft will be water-ice deposits inside permanently shaded craters in Mercury’s polar regions. The ice — which is surprising on a planet where daytime surface temperatures exceed 400 °C — was discovered by NASA’s MESSENGER mission, which studied Mercury between 2011 and 2015 and is so far the only mission to have orbited the planet.

“I’m just so excited to see Mercury close up again, even if just briefly for this fly-by,” says Nancy Chabot, a planetary scientist at the Johns Hopkins University Applied Physics Laboratory in Laurel, Maryland. Chabot was the leading scientist for MESSENGER. “I’ve really missed seeing the planet,” she says.

Will NASA’s Moon rover find enough of the ice it seeks?

The world must cooperate to avoid a catastrophic space collision

Global upper-atmospheric heating on Jupiter by the polar aurorae

How a Majority of the Maize in Africa Is Grown in Regions With Seasonal Pest Infestations
Endangered Marsupials in Australia Endure Sleep Deprivation for Sex
How It’s Made: Pet Combs
Moiré Illusion Cards #shorts
How Steel Bicycles Are Made | How It’s Made