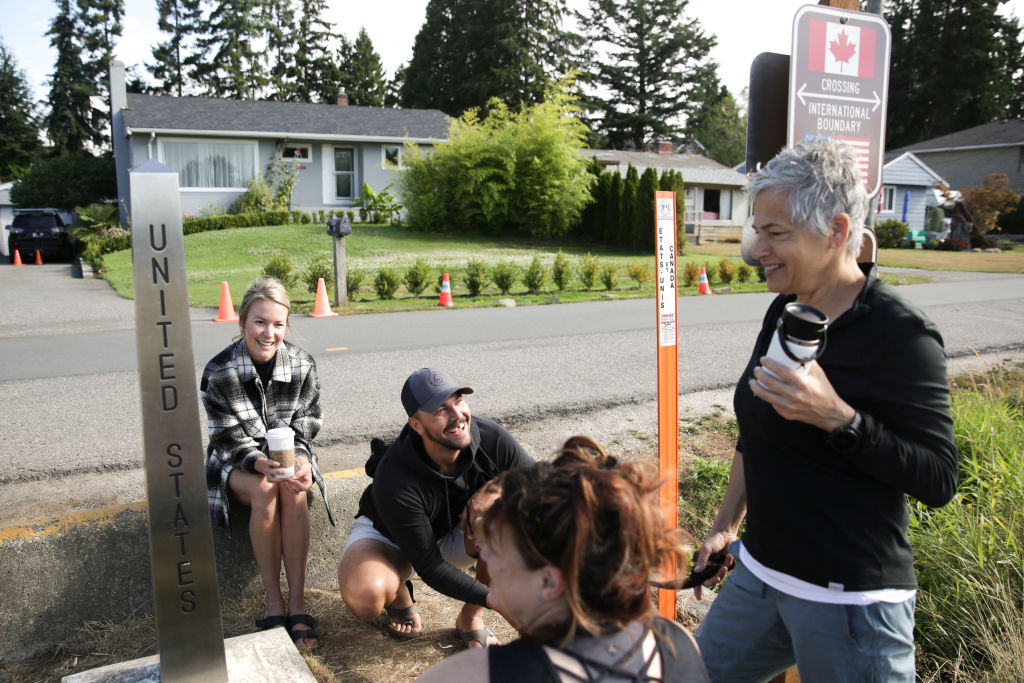 As new strains of the Covid-19 variants virus emerge, California now has the lowest coronavirus transmission rate of the United States, followed by a dramatic drop in cases and the admissions in hospitals. 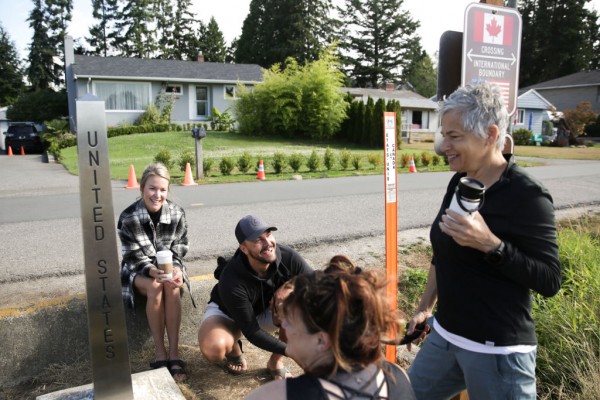 (Photo : Photo by JASON REDMOND/AFP via Getty Images)
Chelsea Perry, left, and husband Garrick Perry of Calgary, Alberta meet with friends Alison Gallant, right, and Katrina Leigh, both of Bellingham, Washington from opposite sides of the USA-Canada border as the border opens to fully-vaccinated Americans though Canadians cannot enter the United States for non-essential travel yet, in Blaine, Washington on August 9, 2021.

In the last two weeks, California’s coronavirus cases have fallen by 32 percent, or 4,000 people, while admitted patients have decreased by 22 percent or 6,000 people. However, due to a new coronavirus variation known as the ‘Delta variant,’ cases spiked in the summer.

The rise of cases in California in the summer loosened some business restrictions, followed by a more severe winter surge in which hospitals were overflowing with sick patients and hundreds perished every week, forcing officials to close schools and stores and lose over $40 million.

The death toll in California has risen to almost 68,000, the highest in the US, although the per-capita rate is lower than in more than half of the states.

According to Andrew Noymer, a public health expert at the University of California, Irvine, the harshness of previous winter may have helped moderate this most recent spike in California.

“It’s a combination of immunity from vaccination and from the huge winter wave that we had,” Noymer said

California’s comparatively high vaccination rates prior to the introduction of the delta strain made a difference, and additional measures like masking also helped to contain the outbreak. According to official data, over 70% of Californians are completely vaccinated, with another 8% having gotten their first dose.

California stated a law that requires attendees at indoor gatherings with 1,000 or more guests should provide evidence of complete immunization or a negative test effecting on Monday.

On July 15, Los Angeles reintroduced the mask requirement, since public health authorities are concerned about the new delta variant that is highly contagious.

Los Angeles, the nation’s most populous metropolis, is home to ten million people and is one of several jurisdictions that has suggested the mandatory wearing of masks, as well as restrictive limitations, because cases are on the rise in many areas of the United States.

Coronavirus cases, positive rates, and hospitalizations have all decreased in recent weeks in Orange County, which has fewer limitations than LA, according to Dr. Regina Chinsio-Kwong, the county’s deputy health director. She believes immunizations played a role, pointing out that the current outbreak was first noticed in the county’s coastal districts and other areas with lower vaccination rates.

The Centers for Disease Control and Prevention (CDC) reports significant levels of coronavirus transmission in many states, including Missouri, Mississippi, Florida, Nevada, and Utah.

Residents who have not yet been vaccinated were advised to do so by health officials around the country. Vaccines for children as young as 12 years old have been authorized and are accessible. According to officials in Los Angeles County, just 0.09 percent of new cases were among those who had been vaccinated.

Also read: Over 36 Countries Assessed, Only One Country Found to have Climate Rating Compatibility