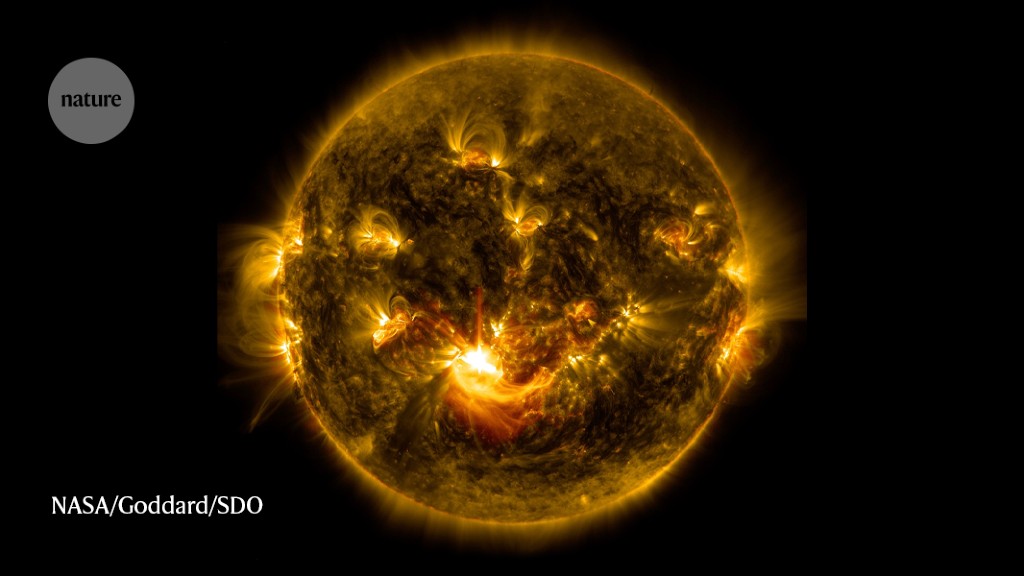 China is set to launch its first dedicated solar observatory. Astronomers say its trio of instruments will provide insights into how the Sun’s magnetic field creates coronal mass ejections and other eruptions.

The Advanced Space-based Solar Observatory (ASO-S) is scheduled to lift off from the Jiuquan Satellite Launch Center in northern China at 7.43 a.m. local time on 9 October. China has sent satellites with individual sun-gazing instruments into space before, but the 900 million yuan (US$126 million) ASO-S is its first observatory with a suite of tools.

Scientists in China have been waiting a long time for the observatory. They first pitched such a mission in the 1970s, says Weiqun Gan, an astrophysicist at the Purple Mountain Observatory of the Chinese Academy of Sciences in Nanjing, and the mission’s chief scientist. “We always wanted to do something like this,” he says.

Astronomers know that the Sun’s magnetic field causes its energetic emissions, but unravelling the relationship between the two is notoriously complex. ASO-S will be important for understanding these connections because its instruments look across different wavelengths at once, says Eduard Kontar, an astrophysicist at the University of Glasgow, UK, and a member of the mission’s science committee. Studying different aspects of the Sun’s activity simultaneously allows researchers to tie eruptions to their underlying causes.

ASO-S joins a slew of solar missions already in orbit around Earth or the Sun. “These are very exciting times for solar physicists in China and around the world,” says Kontar.

ASO-S — also known by the nickname Kuafu-1, after a giant in Chinese mythology who sought to catch and tame the Sun — will observe from an orbit 720 kilometres above Earth’s surface, permanently facing the Sun.

The mission will last for at least four years, says Gan, covering the 2024–25 peak of the solar cycle, which lasts 11 years on average. “In these peak years we can observe a lot of eruptions,” he says.

The Sun produces high-energy bursts of radiation, known as solar flares, and coronal mass ejections (CMEs), slower streams of particles produced in explosions. ASO-S’s main task will be to study the fundamental physics of these eruptions and their origins in energy released by the Sun’s contorting and realigning magnetic field. The process is one of “great scientific importance, with broad implications for understanding similar phenomena throughout the universe”, says Kontar.

Solar flares and CMEs can affect Earth when they reach and interact with the planet’s atmosphere. The resulting ‘space weather’ has the potential to interfere with navigation systems and disrupt power grids. ASO-S can help with forecasting space weather by providing data about the shape of magnetic fields on the Sun’s surface that are most likely to cause eruptions — knowledge that could allow researchers to predict when and where such eruptions will happen, says Gan.

The observatory’s three instruments include a magnetograph to study the Sun’s magnetic field and an X-ray imager for studying the high-energy radiation released by electrons accelerated in solar flares. ASO-S also carries a coronagraph which will peer at the Sun in the ultraviolet and visible range, to scrutinize the plasma produced by flares and CMEs, from the solar surface through to the Sun’s outer atmosphere or ‘corona’.

Unique to ASO-S will be the ability to study an important region known as the middle corona — where solar storms brew — which has never been seen before in its entirety in the ultraviolet spectrum, says Sarah Gibson, a solar physicist at the US National Center for Atmospheric Research in Boulder, Colorado. This will give new clues to the origins of CMEs, she says.

Following the probe’s initial four-to-six-month commissioning phase, ASO-S data will be open for anyone to access and Chinese solar physicists are eager to collaborate, says Jean-Claude Vial, an astrophysicist at Paris-Saclay University.

Data from ASO-S could complement those from other solar observatories. The European Space Agency’s Solar Orbiter, which launched in 2020 and flies close enough to the Sun to sample its atmosphere, carries a coronagraph similar to that on ASO-S. From their different vantage points, the two instruments will produce complementary observations, says Gibson. NASA’s Parker Solar Probe, launched in 2018, also flies close to the Sun to sample its atmosphere.

X-ray data from ASO-S could also be combined with data from ESA’s Solar Orbiter to provide a stereoscopic view of solar flares, says Kontar. This could lead to the first reliable measurements of ‘directivity’ — how intense solar flares tend to be in a particular direction — which could give clues as to how flares accelerate electrons, a major question in solar physics.

ASO-S is part of the Chinese Academy of Sciences’ Strategic Priority Research Program on Space Science that has launched missions such as the Quantum Experiments at Space Scale satellite and the X-ray telescope HXMT. ASO-S is the programme’s first mission that was developed from scratch, so the pressure is on, says Gan. “If our ASO-S mission can do some good work, then maybe it’s possible to extend these programmes and support more missions,” he says.