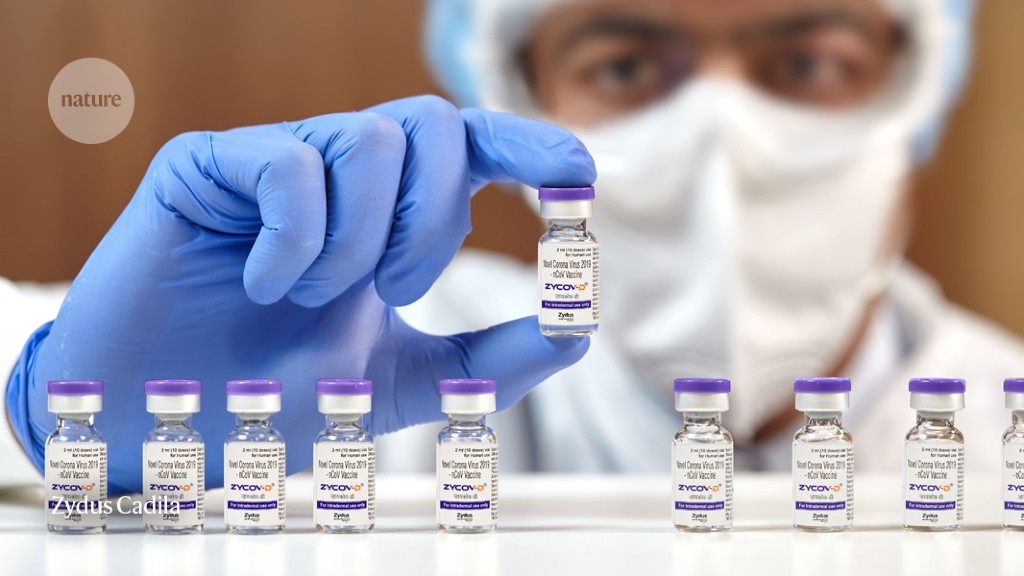 India has approved a new COVID vaccine that uses circular strands of DNA to prime the immune system against the virus SARS-CoV-2. Researchers have welcomed news of the first DNA vaccine for people to receive approval anywhere in the world, and say many other DNA vaccines may soon be hot on its heels.

ZyCoV-D, which is administered into the skin without an injection, has been found to be 67% protective against symptomatic COVID-19 in clinical trials, and will likely start to be administered in India this month. Although the efficacy is not particularly high compared to that of many other COVID-19 vaccines, the fact that it is a DNA vaccine is significant, say researchers.

It is proof of the principle that DNA vaccines work and can help in controlling the pandemic, says Peter Richmond, a paediatric immunologist at the University of Western Australia in Perth. “This is a really important step forward in the fight to defeat COVID-19 globally, because it demonstrates that we have another class of vaccines that we can use.”

Close to a dozen DNA vaccines against COVID-19 are in clinical trials globally, and at least as many again are in earlier stages of development. DNA vaccines are also being developed for many other diseases.

“If DNA vaccines prove to be successful, this is really the future of vaccinology” because they are easy to manufacture, says Shahid Jameel, a virologist at Ashoka University in Sonipat, India.

The urgency of combating COVID-19 has fast-tracked the development of vaccines that use genetic technology, such as messenger RNA and DNA vaccines, says David Weiner, director of the Vaccine & Immunotherapy Center at the Wistar Institute in Philadelphia, Pennsylvania.

RNA vaccines were quicker to show strong immune responses in clinical trials; they have now been delivered to hundreds of millions of people around the world. But DNA vaccines have a number of benefits, because they are easy to produce and the finished products are more stable than mRNA vaccines, which typically require storage at very low temperatures.

ZyCoV-D was developed by Indian pharmaceutical firm Zydus Cadila, headquartered in Ahmedabad. On 20 August, India’s drug regulator authorized the vaccine for people aged 12 and older. The efficacy figure of 67% came from trials involving more than 28,000 participants, which saw 21 symptomatic cases of COVID-19 in the vaccinated group and 60 among people who received a placebo.

ZyCoV-D contains circular strands of DNA known as plasmids, which encode the spike protein of SARS-CoV-2, together with a promoter sequence for turning the gene on. Once the plasmids enter the nuclei of cells, they are converted into mRNA, which travels to the main body of the cell, the cytoplasm, and is translated into the spike protein itself. The body’s immune system then mounts a response against the protein, and produces tailored immune cells that can clear future infections. Plasmids typically degrade within weeks to months, but the immunity remains.

Both DNA and mRNA vaccines have been under development since the 1990s, says Weiner. The challenge for DNA vaccines is that they need to make it all the way to the cell nucleus, unlike mRNA vaccines, which just need to get to the cytoplasm, says Jameel. So, for a long time, DNA vaccines struggled to induce potent immune responses in clinical trials, which is why they had been approved for use as vaccines only in animals, such as horses, until now.

To solve this problem, ZyCoV-D is deposited under the skin, as opposed to deep in muscle tissue. The area under the skin is rich in immune cells that gobble up foreign objects, such as vaccine particles, and process them. “This helps capture the DNA far more efficiently than in the muscle,” Jameel says. Unusually, the vaccine is delivered using a needle-free device pressed against the skin, which creates a fine, high-pressure stream of fluid that punctures the surface and is less painful than an injection.

But despite being more potent than previous DNA vaccines, ZyCoV-D requires a minimum of three doses to achieve its initial efficacy. This is likely to add to the logistical challenge of administering the vaccine during the current pandemic, says Jameel.

Although ZyCoV-D’s efficacy seems to be lower than the 90% or higher achieved by some mRNA vaccines, the figures are not comparable, says Jameel. The ZyCoV-D trials in India earlier this year were conducted while the Delta variant of SARS-CoV-2 was the dominant variant in circulation, whereas earlier mRNA vaccine trials were conducted when less transmissible variants were circulating. “The efficacy is essentially against the Delta variant, so that is pretty good,” he says.

Some researchers have criticized a lack of transparency in the approval process, because no late-stage trial results have yet been published. Zydus Cadila says the trial is still under way and it will submit the full analysis for publication shortly. The company says the first doses will start to be administered in India in September and it plans to produce up to 50 million doses by early next year.

Many DNA vaccines against COVID-19 are currently undergoing clinical trials around the world.

Several other DNA vaccines are being developed against COVID-19, using a variety of antigens and delivery mechanisms (see ‘DNA vaccines in clinical trials’). Two have entered late-stage trials: one by Japanese company AnGes, based in Osaka; the other, which Weiner helped to develop, by Inovio Pharmaceuticals in Plymouth Meeting, Pennsylvania. Inovio is injected under the skin and uses a device that hits the skin with short electric pulses to form pores in the cells that the vaccine can slip through.

More than half a dozen DNA vaccines for COVID-19 are in early-stage trials, including one by the South Korean biotech company GeneOne Life Science in Seoul, and another that Richmond is involved in, developed by the Thai firm BioNet in Bangkok. This vaccine is undergoing a phase I trial in Australia.

But Richmond expects many more DNA vaccines to emerge, targeting diseases for which there are currently no vaccines — from cytomegalovirus, which can be passed on to babies during pregnancy, to respiratory syncytial virus. DNA vaccines are also being trialled or developed for influenza, human papillomavirus, HIV and Zika.

DNA vaccines can store lots of information, which means they can encode large, complex proteins or even multiple proteins. Weiner says that gives them promise as anti-cancer vaccines, a possibility he is exploring in his own research.

“It’s a very exciting time for genetic technologies. They have finally gotten a chance to show what they can do,” he says.

Electric cars and batteries: how will the world produce enough?

A simple text has the power to increase COVID vaccinations

COVID vaccines protect against Delta, but their effectiveness wanes