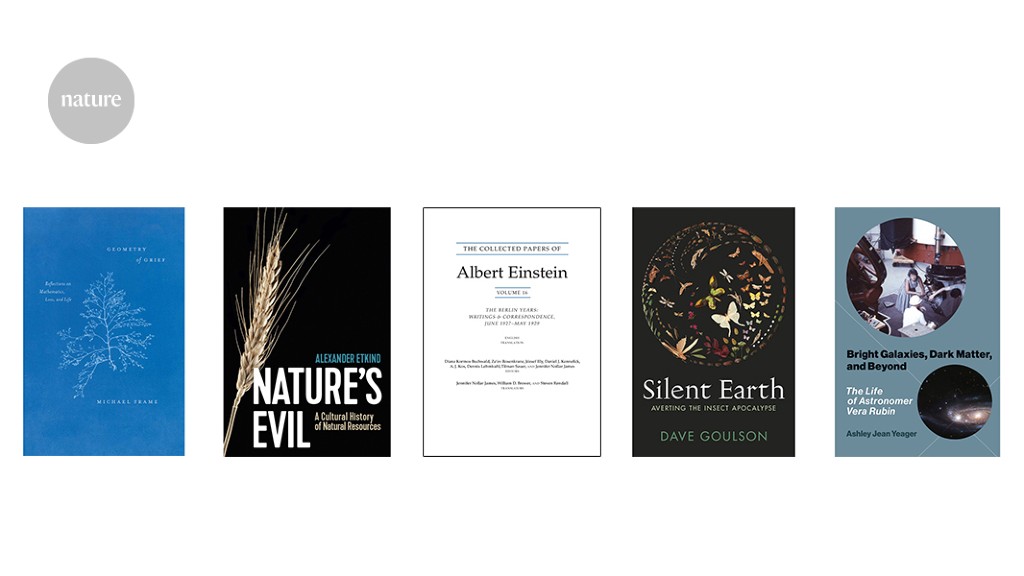 Biologist Dave Goulson loves insects. As a child, he fed yellow-and-black caterpillars and watched them become cinnabar moths. As an adult, he showed how bumblebees avoid wasting time on a flower visited by another bee — by sniffing it for the fresh whiff of smelly feet. They also detect a decrease in the electrostatic charge on its pollen. Bees are “the intellectual giants of the insect world”, he writes enchantingly, while pondering an alarming estimated 75% decline in global insect populations over half a century.

Bright Galaxies, Dark Matter, and Beyond

‘More matter than meets the eye’ is a chapter title of this insightful biography of the pioneering astronomer Vera Rubin by science journalist Ashley Yeager, who interviewed her in later life. Best known for her observations of galactic rotation rates, which provided evidence for the existence of dark matter, Rubin also campaigned for equality in science. Her many honours did not include a Nobel prize, but a new observatory in Chile bears her name and this is the second biography of her in a year (see A. Abbott Nature 591, 523–524; 2021).

This brief, intriguing personal meditation is inspired by mathematician Michael Frame’s lifelong love of geometry — including 20 years’ collaboration with fractal geometer Benoit Mandelbrot — and the childhood loss of his aunt, who set him on his career path. He writes: “Grief informs geometry and geometry informs grief.” How so? His epiphany on first understanding any beautiful mathematical idea is always tinged with sadness, because it is unrepeatable. With quirky illustrations, he integrates the lives of his Mom and Dad.

In detailed chapters on grain, animal products, sugar, hemp, metals, peat, coal and oil, historian Alexander Etkind explores how nature and its commodification has shaped states and societies, as the pursuit of power and wealth has degraded people and despoiled the planet. His Eurocentric survey weaves together material, intellectual, economic, ecological and moral history to reflect on “the mess we have made of our world”. To predict the outcomes of our choices, he argues, it pays to know the consequences of choices that people made in the past.

Albert Einstein’s collected papers began publication in 1987. The 16th of these uniquely comprehensive volumes covers 1927–29, up to Einstein’s 50th birthday, when he hid from acclaim. It includes the 1927 Solvay Conference on quantum mechanics, where he sparred with Niels Bohr but scribbled a note: “Who knows who’ll be laughing in a few years?” He also engaged further in politics, dubbing himself an anti-fascist, and hired assistant Helen Dukas, who preserved his letters post-mortem, creating his vast archive.