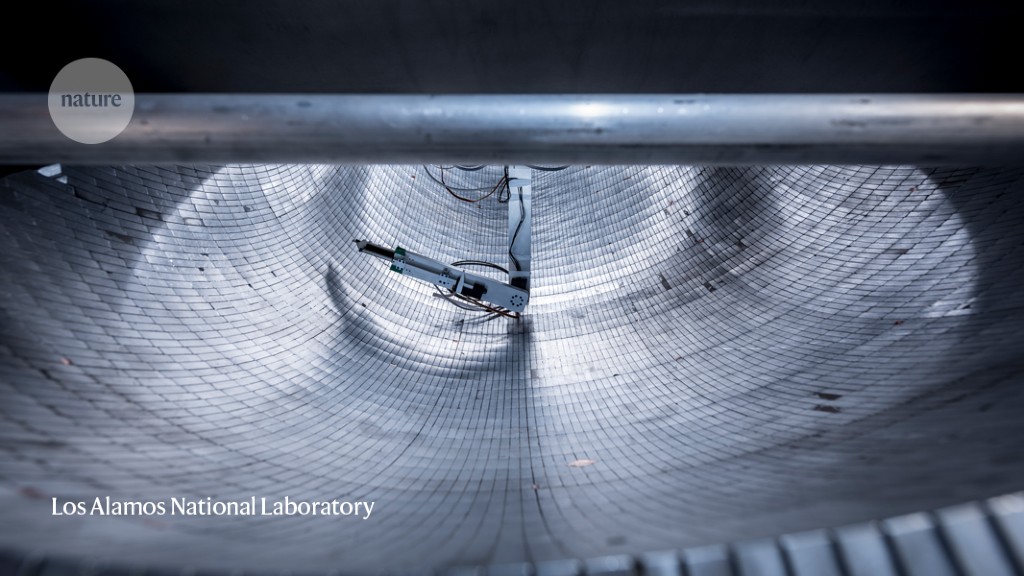 Physicists have measured the lifetime of the neutron more precisely than ever before.

The average time it takes for the subatomic particle to decay is 877.75 seconds, according to an experiment that used magnetic fields to trap ultra-cold neutrons. The results have twice the precision of similar measurements, and are consistent with theoretical calculations. But they do not explain why in an alternative kind of experiment, neutrons last nearly 10 seconds longer.

The latest measurement was presented at a virtual meeting of the American Physical Society on 13 October, and published in Physical Review Letters1.

The result is “very impressive”, says physicist Shannon Hoogerheide, who measures neutron lifetimes using a competing technique at the US National Institute of Standards and Technology (NIST) in Gaithersburg, Maryland.

Most neutrons that exist in nature are part of non-radioactive atomic nuclei, where they can essentially last forever. But isolated neutrons, such as those produced by nuclear fission, are unstable and decay into protons. During the process, each decaying neutron emits an electron and an antineutrino.

How long do neutrons live? Physicists close in on decades-old puzzle

Exactly how long it takes for a neutron to decay is random, but the average time is about a quarter of an hour. To get a precise value, Daniel Salvat, an experimental nuclear physicist at Indiana University in Bloomington, and his colleagues built an experiment called UCNτ at the Los Alamos National Laboratory in New Mexico. They slowed neutrons down to ultra-cold temperatures and placed them in a vacuum ‘bottle’, a metal structure shaped like the halfpipe in skateboarding. Magnetic fields at the bottom of the bottle prevented the neutrons from touching the surface, where they would have been lost.

The team kept neutrons in the bottle for periods of between 20 seconds and nearly half an hour, and detected sparks of light each time a neutron decayed. At the end of each cycle, they collected and counted the remaining neutrons, reloaded the bottle with fresh neutrons and started the process again.

UCNτ began more than ten years ago, but for the newly announced results — based on experimental runs in 2017 and 2018 — the team made several improvements that enabled them to halve their error margins.

The result’s precision is now competitive with calculations based on the standard model, the accepted theory of elementary particles, says Salvat. “For the first time, the experimental precision is starting to approach the precision of the theory,” he says. That means that future improvements could put the standard model itself to the test.

While some researchers use the ‘bottle’ technique to measure the neutron lifetime, others — such as Hoogerheide — use a method that involves watching the particles decay as they move in a beam2. Until about 15 years ago, the results from these two types of experiment largely agreed within their error margins. But as the techniques became more precise, they began to go their separate ways. Neutrons in beams seem to live longer on average (see ‘Unresolved differences’).

UCNτ’s latest measurement does not help to bridge the gap, says Anatolii Serebrov at the Petersburg Nuclear Physics Institute in Gatchina, Russia. “Even in the light of that new result, the discrepancy remains almost intact,” says Serebrov, who led a high-precision bottle experiment in 20053 that first pointed to a possible discrepancy.

To help solve the neutron-lifetime dilemma, physicist David Lawrence at Johns Hopkins University in Baltimore, Maryland, and his collaborators have been developing a technique to measure it using neutron detectors on space probes. “It would be really useful to have a third way of doing it,” he says.

The method relies on the fact that most planetary bodies eject neutrons when hit by cosmic rays. Many of the neutrons fail to escape a planet’s gravity and eventually rain back down — but by then, some of those have transformed into protons. Comparing the number of neutrons emitted into space with those that come back can provide an estimate of the neutron’s lifetime4. “Some fraction of the neutrons will go up, decay and never come back down,” Lawrence says. He adds that the ideal way to do such an experiment would be with a small, dedicated probe in orbit around Venus, because the planet’s carbon dioxide atmosphere does not absorb neutrons well.

The UCNτ team has been working on several improvements to increase precision further. Hoogerheide and her colleagues at NIST are doing the same with the beam technique; they expect that its precision can improve by around a factor of 10, she says.

US achieves laser-fusion record: what it means for nuclear-weapons research

Possible overestimation of isomer depletion due to contamination

The vanishing neutrinos that could upend fundamental physics