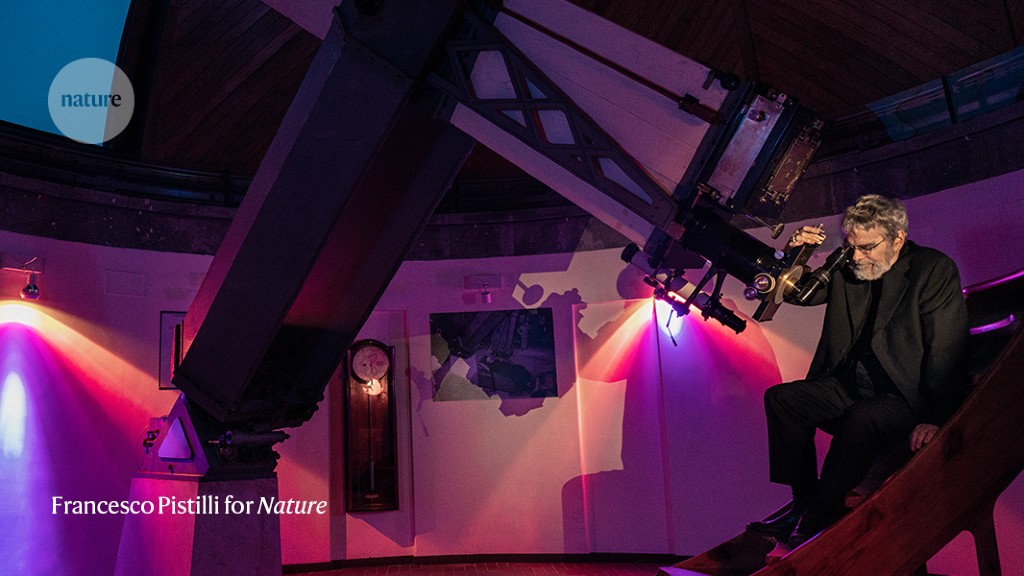 I spend a lot of time looking upwards. Here, at Castel Gandolfo, outside Rome, I’m peering through the Vatican Observatory’s historic 1891 telescope. It can’t compete with Rome’s light pollution and is mainly for fun and tourism — we’re hoping to welcome visitors again soon — but it still offers views of the Moon, the rings of Saturn and other highlights of the night sky.

The observatory also does serious science, however, and we own and operate a 1.8-metre research telescope on Mount Graham in Arizona, which I’ve used to study minor planets beyond Neptune. I’ve had research roles at Harvard College Observatory and the Massachusetts Institute of Technology, in Cambridge, and Lafayette College in Easton, Pennsylvania, and spent 20 years studying the properties of meteorites collected from around the world. Many of those samples are now at the Vatican.

I usually wear a T-shirt at work. But if I’m posing for a photo, I’ll always wear my Jesuit brother’s attire. I took vows in 1991. The Vatican Observatory shows the world that the Church cares about science. A man of the cloth next to a piece of scientific equipment helps to tell that story.

All 12 staff astronomers at the observatory are either priests or Jesuit brothers like myself, but you don’t have to be Catholic to use our facilities. We collaborate with other astronomers and graduate students from varied backgrounds. Around 100 active scientists have had their names on papers connected to the Vatican Observatory.

I was appointed in 2015 by Pope Francis, a true honour for a Catholic kid from Detroit, Michigan. Francis himself doesn’t take an intense interest in astronomy, but Pope Pius XII was a real enthusiast. John XXIII had little knowledge of stars and planets, but he’d bring up a bottle of wine and hang out with the astronomers, and watch them work.

Looking at the moons of Jupiter or a distant galaxy gives me joy. To me, that joy is the presence of God.

Deal-making in the early Universe: galaxies merged to grow

Why COVID vaccines didn’t win a science Nobel this year