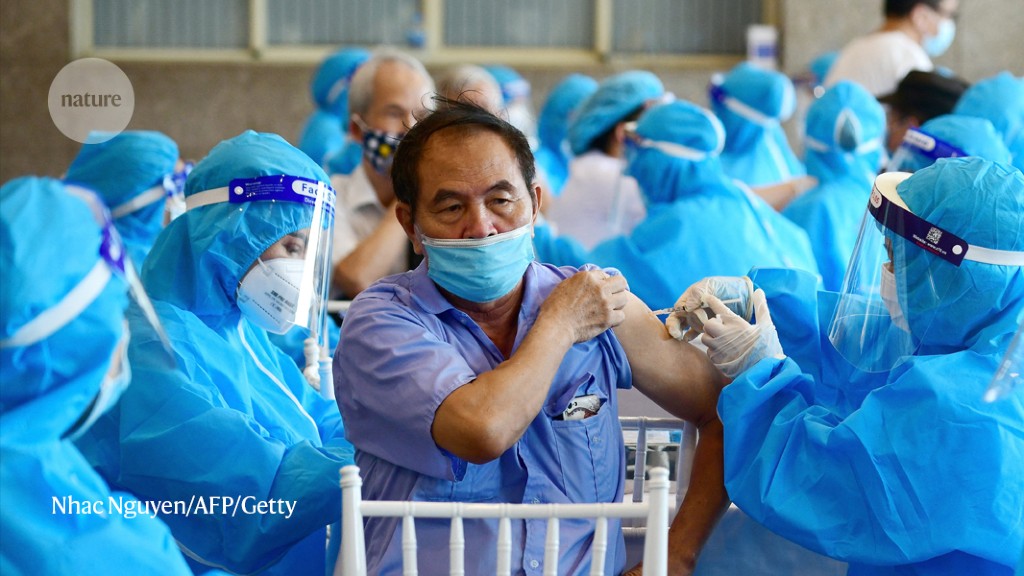 Vaccines cut delta transmission risk, but not for long

The first study to look directly at how well vaccines prevent the spread of the Delta variant of SARS-CoV-2 brings good news and bad.

It shows that people infected with Delta are less likely to pass on the virus if they have already had a COVID-19 vaccine than if they haven’t (D. W. Eyre et al. Preprint at medRxiv https://doi.org/gz5f; 2021). But that protective effect is small, and dwindles alarmingly over time.

Researchers analysed testing data from 139,164 close contacts of 95,716 people infected with SARS-CoV-2 between January and August 2021 in the United Kingdom, when the Alpha and Delta variants were competing for dominance.

Although vaccines did offer some protection against infection and transmission, Delta dampened that effect. A vaccinated person who had a ‘breakthrough’ Delta infection was almost twice as likely to pass on the virus as was someone who was infected with Alpha. And vaccines’ effect on Delta transmission waned to almost negligible levels over time.

The results “possibly explain why we’ve seen so much onward transmission of Delta despite widespread vaccination”, says co-author David Eyre, an epidemiologist at the University of Oxford, UK.

A Chinese sample-return mission, Chang’e-5, has begun to yield results, dating bits of lunar lava at two billion years old. “This is the youngest-ever lava flow dated from the Moon,” says Katherine Joy, a planetary scientist at the University of Manchester, UK.

Chang’e-5 landed on the Moon on 1 December 2020, scooped up samples of the surface and lifted off again two days later. It then performed a rendezvous with its mother ship in lunar orbit, which subsequently flew back to Earth. A re-entry capsule carrying the samples landed in China’s Inner Mongolia region on 16 December.

Samples returned by the US Apollo and the Soviet Luna programmes had provided evidence of volcanic eruptions on the Moon stretching back more than 4 billion years, with the majority between 3.8 billion and 3 billion years ago. But no mission had landed in an area as young as Chang’e-5’s landing site, called Oceanus Procellarum.

The findings, published in Science on 7 October, fill a gap in the Moon’s geology (X. Che et al. Science https://doi.org/10.1126/science.abl7957; 2021). By dating rock from the lunar surface and matching it to the number of craters in the surrounding region, scientists can infer that locations on other worlds, such as Mars, with similar numbers of craters are of a comparable age.

Renowned geneticist Francis Collins has announced that he will step down as director of the US National Institutes of Health (NIH) by December.

“This is the right time, it’s the right message, it’s the right decision,” says Collins (pictured), who has led the US$41-billion biomedical agency through a historic and deadly pandemic. Picked for the job by then-president Barack Obama in 2009, Collins has had the role for longer than any other presidential appointee, serving under three administrations. It’s time for the agency to benefit from new leadership, he says, adding that he had considered whether his departure would upset the NIH’s response to COVID-19. “I’m not worried that if I walk away by the end of the year, that will do any serious harm to our contribution to fighting this pandemic.”

Collins has built a reputation as a savvy spokesperson for scientific research, winning supporters across party lines, even through a politically charged public-health crisis. “I think he deserves an A+ as NIH director,” says Elias Zerhouni, a radiologist who held the job for six years, before Collins. “I know how hard it is to maintain that, and frankly I think we owe him a debt of gratitude.”

Before taking the top job at the NIH, Collins made key contributions to the burgeoning field of genetics and medicine. He co-discovered the gene that causes cystic fibrosis, and his laboratory, eventually at the NIH’s National Human Genome Research Institute (NHGRI) in Bethesda, Maryland, found genes linked to conditions including Huntington’s disease. As head of the NHGRI from 1993 to 2008, he led the Human Genome Project.

“He’s a world-class scientist,” says Anthony Fauci, director of the NIH’s National Institute of Allergy and Infectious Diseases in Bethesda, who describes Collins as a close professional partner and friend.

But Collins’s time with the NIH hasn’t been without controversy. The agency has faced criticism for being slow to enact policies to protect researchers from sexual harassment, and been called on to improve funding for Black researchers.

Collins will continue to lead his laboratory at the NHGRI after he steps down. US President Joe Biden has not yet nominated a successor.

Climate change, science and COP26: have your say

Francis Collins to step down at NIH: scientists assess his legacy

Deal-making in the early Universe: galaxies merged to grow

Episode 349: Do you know your ‘climate fingerprint’?
A Major Environmental Plan in England Involves Addressing Sewage Leaks and Rebuilding Animal Habitats
Turkey Earthquake Update: UK Experts to Assist in the Search for Survivors As Death Toll Continue to Increase
A Dying Hot Jupiter and The Birth of Carbon Planets
How a Majority of the Maize in Africa Is Grown in Regions With Seasonal Pest Infestations