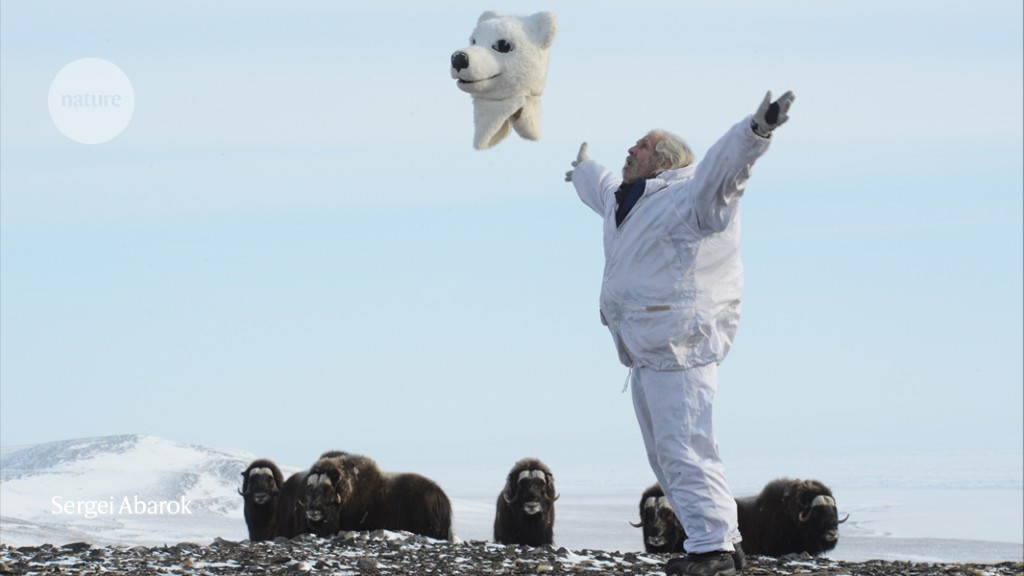 As a wildlife-conservation biologist studying climate change, I want to understand the evolving environment through the eyes of large animals. My work — usually in cold, remote places — involves finding animals, and ways to eat, sleep and be warm. I might be miserable, but I get insights that others cannot into what animals are doing.

For about 15 years I’ve been interested in musk oxen (Ovibos moschatus), social herd animals that roamed with woolly mammoths. This picture was taken on Wrangel Island, off the northeast coast of Russia, when I was studying how musk oxen react to polar bears. Because polar ice is melting, more polar bears are hunting on land, and they’re known to have killed musk oxen. These herd animals typically don’t flee from predators such as grizzly bears. They tend to form huddles instead, and male musk oxen have killed grizzlies. Would they try to kill polar bears, too?

To find out, I dressed as a polar bear, pulling a bear head on and placing a cape over a range finder, camera and data books. I was cold and nervous. I didn’t want to be killed by a charging musk ox — or by anything else. If some oxen charged, I’d throw off my costume and stand up straight, as I’m doing here; so far, that had stopped them. I’d also encountered a female polar bear with newborn cubs, but she’d left me alone. This picture is from the end of a session, and I’d lived another day. Whew!

I learnt that musk oxen are more likely to flee from polar bears than from grizzlies. But during this trip to Russia, I was arrested — over a date error on my permits. In court, the only word I understood was ‘CIA’. I was let go, but banned from returning for three years, so I’m now studying the huemul (Hippocamelus bisulcus), an endangered species of deer that lives in the shadows of glaciers at the tip of South America. As glaciers recede, how will huemul populations respond?

In memory of a game-changing haematologist

Policy, drought and fires combine to affect biodiversity in the Amazon basin

The contribution of insects to global forest deadwood decomposition