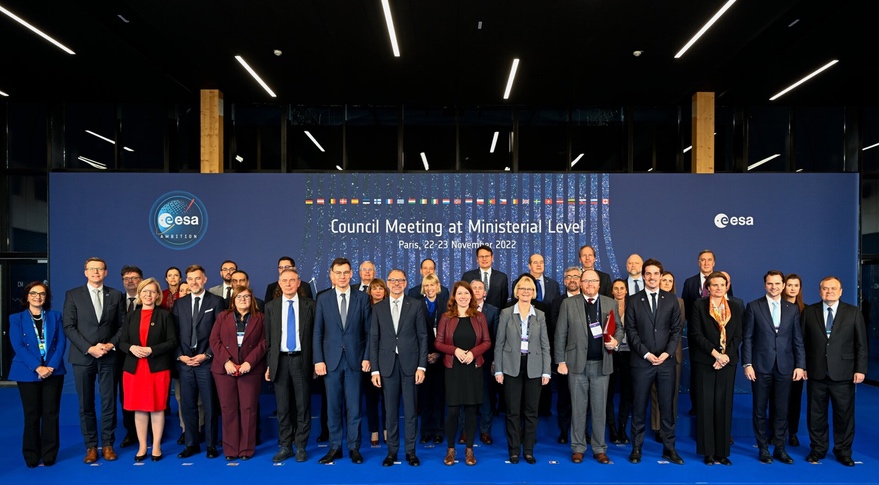 PARIS — European Space Agency member states have provided the agency with 16.9 billion euros ($17.5 billion) for the next three years, a significant increase over 2019 but more than 1.5 billion euros below what the agency sought.

At a Nov. 23 briefing concluding the two-day ministerial conference here, ESA Director General Josef Aschbacher announced that ESA members had agreed to contribute 16.923 billion euros over the next three years, a 16.6% increase — before accounting for inflation — from the previous ministerial in 2019. However, it fell short of the roughly 18.5 billion euros that ESA leadership sought going into the meeting.

“This is a very significant increase, but you have to see this figure in context,” Aschbacher said, citing Europe’s energy crisis, high inflation, and economies still recovering from the pandemic. “Despite these circumstances, with inflation being so high, I have to say I’m very impressed by this figure.”

Despite falling short of its target, none of ESA’s major priorities were deleted from the budget, he said. They ranged from starting work on a lunar cargo lander that could participate the NASA-led Artemis program and funding a share of the European Union’s IRIS² secure connectivity constellation to revampin the ExoMars rover mission that had been sidelined after Russia’s invasion of Ukraine and extending ESA’s participation on the International Space Station to 2030.

“Nothing has been curtailed. Some of it was reduced slightly in scope,” he said. “Nothing had to be deleted or taken out of the portfolio.”

One example of an “under subscription” was ESA’s FutureEO program, a suite of future Earth science missions. Simonetta Cheli, ESA director of Earth observation, said at the briefing that the program received about 80% of the request, but did not provide a specific figure. She said ESA would go back to the member states between December and February and develop a plan “of what can be implemented” given the available funding and strategic priorities.

The same will be true for other programs that fell short of their requests, Aschbacher said, with discussions with the member states contributing to those programs to see what can be done with the available funding. “We define this in work plans that are decided by the member states,” he said. “This is a standard process, a standard procedure, as we do every time after a ministerial conference.”

ESA provided few details about funding levels beyond the top-level numbers for each of its major programs, and directors for most of those programs were not available for comment after the briefing.

Some programs did get all the funding they requested and more. That included a request for 600 million euros for a transition program for the Ariane 6 as that rocket, which has suffered several years of delays, enters service over the next three years. ESA went into the ministerial needing to close a nearly 200 million euro gap. Daniel Neuenschwander, ESA director of space transportation, said at the briefing the agency was “a little bit above what we expected” for the program but did not give a specific figure.

Aschbacher praised member states for their contributions. “Almost every country had a significant increase of its budget this year compared to last time,” he said.

However, there was also some confusion about the contributions each member state made. That included ESA’s largest contributor, Germany, which is providing 3.51 billion euros, compared to 3.29 billion euros in 2019, according to ESA. However, a release by Germany’s economic ministry claimed the country was providing 4 billion euros.

Anna Christmann, the German government’s federal aerospace coordinator and chair the ESA ministerial council meeting, praised the outcome. “I’m delighted that we have a very good result from this conference,” she said. “I think we have shown what European ambition really is and what it means to collaborate together for making these efforts possible.”