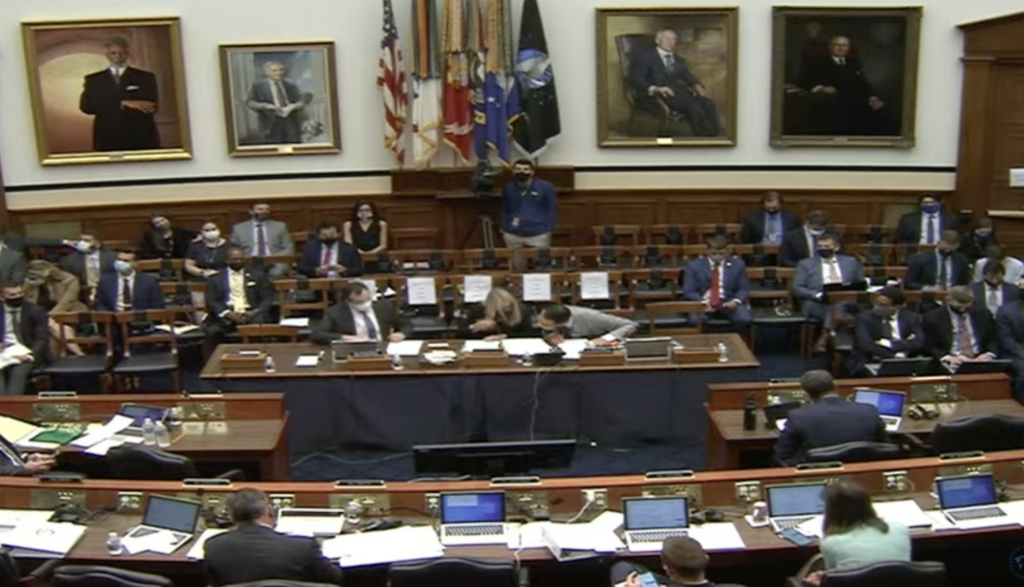 The committee approved a proposal by Rep. Mike Rogers (R-Ala.) to add $23.9 billion to the Pentagon’s $715 billion budget request for fiscal year 2022. HASC Chairman Rep. Adam Smith (D-Wash.) opposed the increase but Rogers’ amendment was supported by a large number of Democrats and passed 42-17.

The HASC markup continued late into the night on Wednesday.

Procurement of commercial space technology — The bill includes legislation proposed by Rogers that prohibits the Space Force from starting a new procurement in-house until the services determines that there is no commercial alternative that can be procurement from the open market.

According to the language, the “service acquisition executive for space systems and programs may not establish a program of record for the Space Force unless the service acquisition executive first determines that there is no commercially available capability that would meet the threshold objectives for that proposed program; and submits to the congressional defense committees such determination.’’

The proposal from Reps. Jason Crow (D-Colo.) and Lamborn passed as part of a bloc of amendments on military personnel.

This provision sets up a fight with the Senate. The Senate Armed Services Committee did not have language in its version of the NDAA on a Space National Guard.

Space Force capabilities to combat threats — The U.S. Space Force has to provide a report to defense committees on the most likely and most dangerous threats to U.S. space dominance in the short and long term, a plan to mitigate them, and the capabilities needed to implement that plan. The amendment was introduced by Rep. Doug Lamborn (R-Colo.).

“The committee notes with increasing alarm the rate at which our near-peer rivals are rapidly enhancing their own space capabilities with a view to challenging American space dominance and nullifying the capabilities and services of our space assets,” the bill says.

The HASC is interested in “the pace at which new capabilities and technologies which will solidify American space dominance are developed and procured. There is also significant interest in ensuring the U.S. maintain freedom of movement and action on the moon and in lunar and cislunar space.

The committee also asks the Defense Intelligence Agency for an update to its 2019 report on space and counterspace programs that could challenge U.S. or partner interests in the space domain.

“This Committee is concerned that the nation’s strategic SATCOM capability will have growing vulnerabilities during the transition period as currently planned, and wants to ensure that this critical capability is sustained and evolved as responsively as possible to the rapidly emerging and evolving threat environment,” says the bill.

The amendment from Scott Franklin (R-Fla.) says the committee supports the SDA’s constellation in LEO but “also recognizes that the proliferation of larger constellations of smaller satellites in low Earth orbit is increasing the need for better space surveillance technology and investment in technologies that reduce future space debris.”

The committee is interested in “better understanding defense investments in technologies that may reduce future space debris, including non- toxic or non-reactive alternatives to Hall thrusters.”

HASC wants a report on DoD efforts to reduce future space debris, the degree to which DoD has assessed the impact of space debris on the national defense space architecture, an assessment of the risk posed by the proliferation of commercial or military satellites in low Earth orbit, and how DoD is engaging allies and partners on efforts to develop technologies that reduce space debris;

The amendment from Don Bacon (R-Neb.) says the committee is “aware of significant vulnerabilities to the Global Positioning System (GPS) enterprise its associated PNT infrastructure.”

The committee “urges the Department of Defense to fully leverage technologies to harden and reinforce PNT infrastructure” and directs doD to submit a strategy to address current and projected vulnerabilities in GPS infrastructure and its plan to increase resilience.

Smith in his chairman’s mark released on Monday: