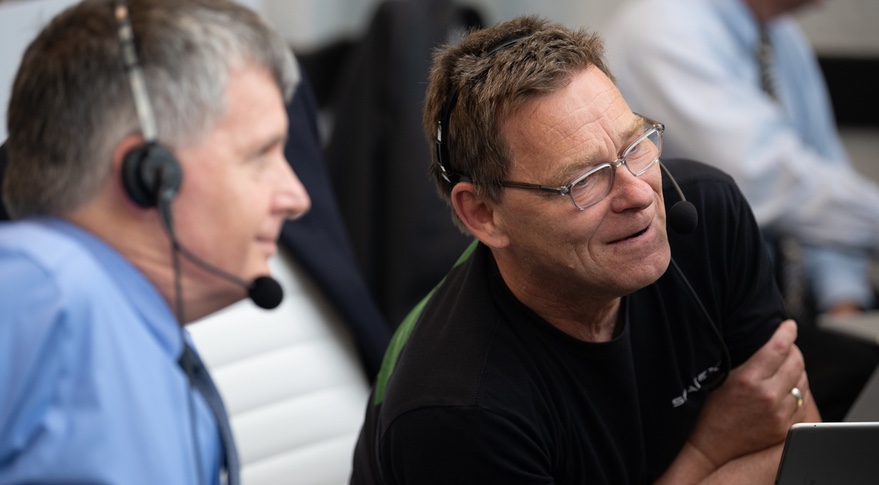 MOUNTAIN VIEW, Calif. — Hans Koenigsmann, one of the first employees of SpaceX and who recently retired from the company, has joined the board of satellite laser communications company Mynaric.

Mynaric announced Oct. 6 that Koenigsmann will join the German company’s supervisory board, the equivalent of a board of directors. He will take the place of Gerd Gruppe, a former executive board member of the German space agency DLR, who is stepping down.

Koenigsmann was one of the first employees to join SpaceX in 2002, shortly after its founding by Elon Musk. He held technical oversight roles for much of his career there, including as vice president of build and flight reliability. He stepped down from that post early this year, serving as an adviser for several months before retiring.

“I have seen how teams pushing the boundaries of what’s considered doable look like and provided technical assurance throughout my career,” he said in a company statement. “Mynaric has already achieved significant milestones and has what it takes to build laser communications at scale at this important moment in time.”

Mynaric’s chief executive, Bulent Altan, worked with Koenigsmann in the early years of SpaceX. “We have a relationship going back to 2004, and I’ve been keeping him abreast of what I’m doing in the investment world and at Mynaric,” Altan said in an interview. “I brought up the idea to him about joining Mynaric.”

He described Koenigsmann as “a natural” for the board position because of his extensive experience at SpaceX. “It’s good for someone like Hans, with his view of the space sector, to come in and do a double-check on our work.”

Altan said that Mynaric is seeing a sharp increase in interest in its laser communications systems. He credits that in part to the Space Development Agency, which included laser crosslinks in its request for proposals for its Transport Layer Tranche 1 constellation of 126 satellites. “That was a huge signal to the rest of the industry that lasercom is something you can bet on,” he said.

Another factor is the growing adoption of intersatellite links on satellite megaconstellations. He argued those efforts are showing to the broader industry that laser communications is both technically feasible and affordable. The company also recently opened a factory in Germany for mass production of laser terminals that will initially produce several hundred units a year, scaling up to several thousand.

In the near term, Mynaric is completing a laser communications terminal that will be installed on a Telesat satellite for a demonstration that is part of DARPA’s Blackjack program. “That is going to demonstrate Mynaric’s capability in space,” he said.