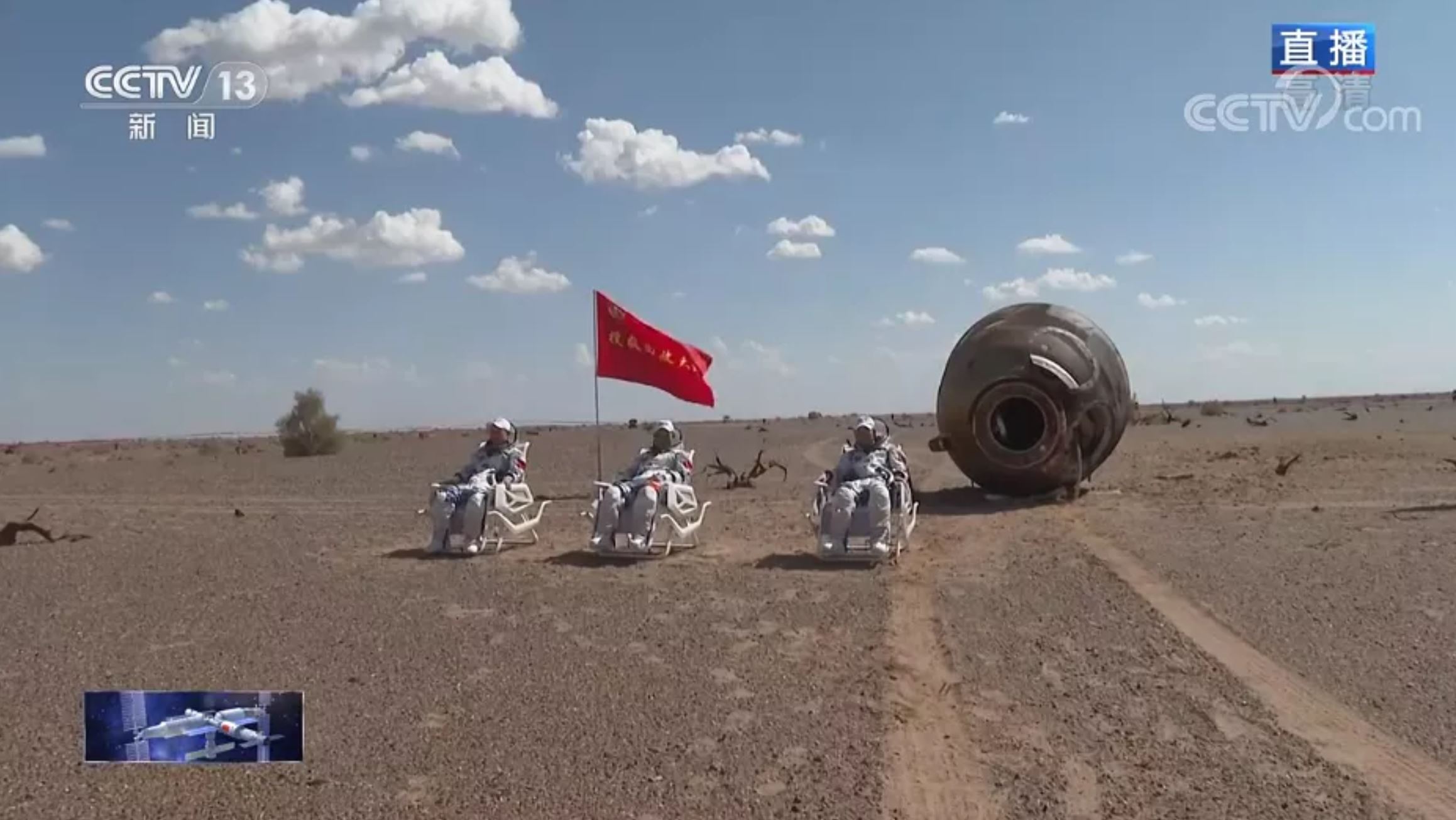 Commander Nie Haisheng, Liu Boming and Tang Hongbo touched down inside the designated landing zone near Dongfeng in the Gobi Desert, Inner Mongolia, at around 1:34 a.m. Eastern Friday.

The main, 1,200-square-meter parachute opened around 10 kilometers above the ground, with the heat shield jettisoned at around 5.5 kilometers up. The landing occurred within the time and area indicated by airspace closure notices issued earlier in the week. Ground search and rescue teams swiftly located and secured the capsule after touchdown.

The three Shenzhou-12 astronauts had on Wednesday completed a 90-day stay aboard the core module for China’s under-construction space station. The Shenzhou-12 spacecraft separated from the Tianhe module then carried out circumnavigation of Tianhe and a radial rendezvous test. China Space News reported that Shenzhou-12 approached as close as 19 meters from Tianhe.

The mission also set a new national human spaceflight duration record of just over 92 days and four hours, eclipsing the  33 days of Shenzhou-11.

The landing took place in a new designation area in the vicinity of the Jiuquan Satellite Launch Center. Previous landings occurred in the grasslands of Siziwang, Inner Mongolia. Factors for the change include increasing population density around Siziwang, and the need to optimize for astronaut recovery as the duration of China’s spaceflight missions increases.

The mission was the third of 11 missions scheduled to construct, supply and inhabit China’s three-module, 66-metric-ton space station.

The Tianhe core module launched in April and is the first of three space station modules. It is currently in a 381 x 384-kilometer orbit inclined by 41 degrees. The Tianzhou-2 cargo spacecraft launched in may to deliver supplies, EVA suits, experiments and propellant to Tianhe ahead of Shenzhou-12.

Tianzhou-2 will soon undock from the Tianhe aft port and dock with the forward docking port and test microgravity propellant transfer. Tianzhou-2 will then later be deorbited over the South Pacific.

Tianzhou-3 is being prepared to launch around Sept. 20 from Wenchang following rollout of the fourth Long March 7 rocket Sept. 16. It will provide supplies and other equipment for the six-month-long visit to Tianhe of the three Shenzhou-13 astronauts. The latter mission will launch from Jiuquan on a Long March 2F as soon as early October.

Unofficial projections have Shenzhou-13 running from October to March 2022. Tianzhou-4 supply mission would then follow in around a month later, with Shenzhou-14 in May 2022. The two experiment modules, Wentian and Mengtian, are to launch May-June and August-September respectively. Finally, Tianzhou-5 would launch in October in preparation for Shenzhou-15 in November 2022, completing the construction phase.

Cloud leaders Amazon, Google and Microsoft show the once-booming market is cooling down
Lockheed Martin, Viasat executives named to presidential advisory panel
Gusty Thunderstorms, Another Storm to Hit Southern California
There’s a buzz about green hydrogen. But pink, produced using nuclear, may have a huge role to play too
Leadership in science: “There is nothing wrong with being wrong”