WASHINGTON — OrbAstro, a space-as-a-service startup with visions of flying “tiny satellites in large flocks,” is ready to launch its first half-dozen smallsats in 2022

With a January launch lined up in India, spots reserved on upcoming SpaceX rideshare missions and a launch agreement with an undisclosed third provider, OrbAstro says it has five commercial satellites plus a pilot satellite for an in-house project all scheduled to launch next year. The UK and New Zealand-based company expects to add one or two more missions to its 2022 roster in the coming months.

OrbAstro says it has taken deposits for a dozen more satellites slated for launch in 2023-2024. “Many of these are pilot missions for large nanosat [and] microsat constellations,” OrbAstro CEO and co-founder Ash Dove-Jay said in an interview this week.

The 12-person company, which was founded in 2018 by two of the three original employees of Oxford Space Systems, announced Sept. 23 a contract with Singapore-based satellite propulsion provider Aliena PTE Ltd. to fly its all-electric attitude and orbit control system onboard OrbAstro’s first microsatellite scheduled for launch a year from now.

Like Oxford Space Systems, the deployable antenna and space structures company that helped put the UK’s Harwell Space Cluster on the map, OrbAstro has been renting facilities on the sprawling research park near Oxford University to build and test cubesat-based nanosatellites.

Dove-Jay and his two co-founders, CTO Vinoth Gurusamy and head of electronics Kalhana Colombage, have been keeping a low profile as they bootstrap their space-as-as-service venture by building, testing and selling cubesat-based nanosatellites and smallsat subsystems designed in house.

Although OrbAstro has a website that describes its satellite and subsystem offerings, it doesn’t list the company’s leadership team, address or clients. The UK Space Agency, Innovate UK, the European Space Agency, and the ESA Business Incubator Centre UK are named as supporters.

“We secured 4 million pounds, roughly, in government and space agency grants and contracts, [plus] some personal investment as well,” Dove-Jay said. “That’s allowed us to work quietly in the shadows for a while to the point where we are now.”

From contracts to countdowns

Where they are, according to Dove-Jay, is ready to start announcing some of the commercial contracts they’ve been busy nailing down.

OrbAstro’s customers, Dove-Jay said, are a “mishmash” of “one-off academic payloads” and commercial ventures “looking to get flight heritage on their subsystems” or are “piloting a service using our platforms.”

The just-announced contract with Aliena calls for flying the propulsion provider’s hardware in September 2022 on an ORB-12 microsatellite (so named because it’s the size of a stack 12 cubesats, each measuring 10 centimeters on a side).

Dove-Jay said OrbAstro is not at liberty to disclose the launch provider it lined up for the first flight of ORB-12.

The mission will give Aliena flight heritage for its so-called Aliena-Aurora multimodal all-electric AOCS propulsion system that it developed in partnership with Finland-based Aurora Propulsion Technologies. The system consists of an Aliena-designed MUSIC Hall-effect thruster and an Aurora resistojet attitude control module.

The ORB-12 mission will also be used to test a variety of internally developed OrbAstro subsystems, including an optical transceiver, a synthetic aperture radar (SAR) payload, a compact optical imaging system, an onboard artificial intelligence processing unit, and thermal management and electrical power systems.

While the ORB-12 mission is the first of several planned announcements, it’s not expected to be OrbAstro’s first launch.

The company has a variety of 3U- and 6U-class nanosatellites scheduled for launch in 2022, starting with a 3U nanosat that OrbAstro had expected to launch this year  to put its cubesat-derived ORB-3 platform and subsystems through their paces. 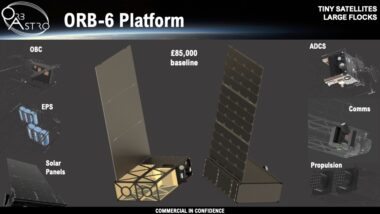 That first satellite is expected to launch in January as a secondary payload on an Indian Polar Satellite Launch Vehicle carrying the Indian Space Research Organisation’s Oceansat 3. Dove-Jay said OrbAstro made arrangements for the PSLV launch after plans fell through to launch with SpaceX this year as part of Momentus’ still-delayed Vigoride space tug mission.

Dove-Jay said OrbAstro has three SpaceX Falcon 9 rideshare missions lined up next year for its 6U-class nanosatellites, the ORB-6.

While OrbAstro is keeping busy building nanosatellites, it does not primarily see itself as a smallsat manufacturer. “It’s not the end goal for the company. It’s more of a means to an end,” Dove-Jay said. “We eventually want to become our own customers with these platforms and pursue our own downstream applications.” 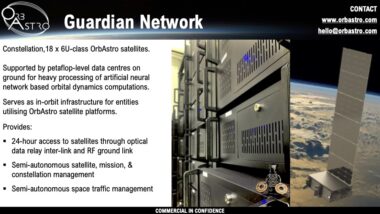 One of those downstream applications is the Guardian Network, an envisioned 18-nanosatellite constellation designed as in-orbit infrastructure for OrbAstro’s space-as-a-service venture.

Another downstream application involves a smallsat constellation merging optical imaging with high-resolution 3D mapping. Some of the enabling technologies will be hosted on OrbAstro’s ORB-12 mission with Aliena.

“It’s more longer term,” Dove-Jay said of the envisioned imaging constellation, “but it will allow us to de-risk some of these technologies.”

Dove-Jay described the envisioned constellation as “a semiactive, multi-static SAR.”

“It’s effectively one microsat with a cluster of typically a dozen nanosats around it. The microsat transmits and the nanosats receive,” Dove-Jay said. “Because of the different olocations of nanosats from the transmitter, you can effectively create a three-dimensional image of what you’re looking at. The more satellites you’ve got, the [more] power you’ve got, the higher resolution you can get to. And we think within the next four to five years, it’s perfectly viable for us to hit 10-centimeter resolution in Ka-band.”

In the meantime, OrbAstro has enough satellites to build that it is thinking about larger facilities. “We can, at a push, get a couple satellites through a month right now,” Dove-Jay said. “Over the next year, we should be able to scale that to five or six a month, maybe 10 if we’re lucky.”

Although the Harwell campus affords on-site access to vibration testing and other shared facilities, OrbAstro is setting its sights beyond the research park. “We may shift to Scotland. We’re thinking about New Zealand as well,” he said.

“We will probably in the next year or two set up a U.S. presence just to open up the U.S. market to us a bit more.”

Although OrbAstro has so far avoided outside financing, that might soon change. In the year ahead, Dove-Jay said, OrbAstro will be looking to raise 2-3 million pounds, preferably in the form of a loan.

“We’re at a point now where demand is outstripping what we can provide,” he said. “So it’s a case of do we limp along for a couple of years until we organically grow to what the market needs, or do we scale up quickly?”

Tropical Cyclone Developing off the Coast of Western Australia Expected To Make Landfall This Weekend
The Greatest Failed Experiment Ever
Water tech catches a wave
Facebook and Instagram will reinstate Trump after two-year ban
DOJ files second antitrust suit against Google, seeks to break up its ad business