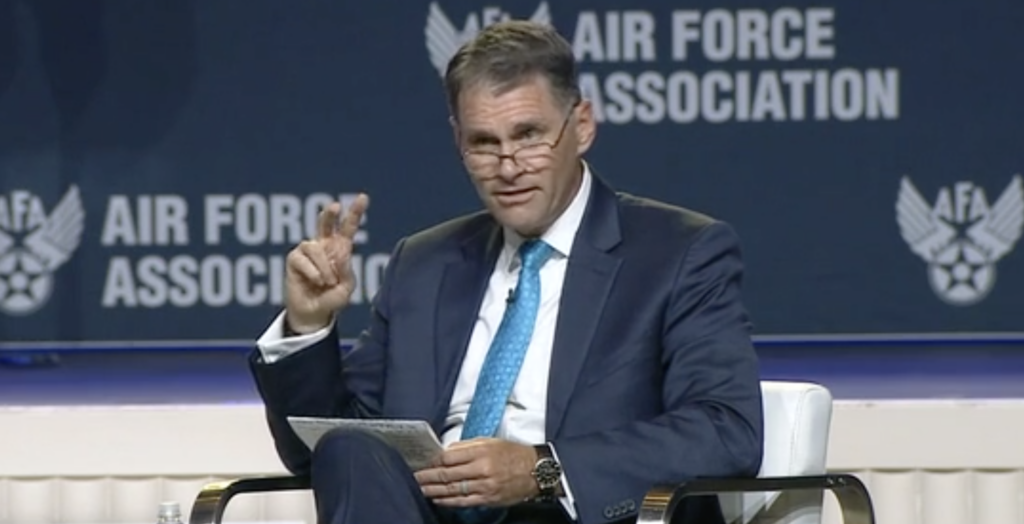 Andrew Cox: There is no way to have a fruitful discussion with industry if I can’t talk about the threat

NATIONAL HARBOR, Md. — The first briefing with space and defense contractors planned by the Space Force’s Warfighting Analysis Center Oct. 27 will be at a classified facility in the Washington, D.C. area.

SCI is short for sensitive compartmented information, a classification category.

There is no way to have a fruitful discussion with industry “if I can’t talk about the threat,” Cox said. The Oct. 27 “business forum” planned by the SWAC will focus on missile warning satellites and how to make future satellites more resilient to attacks. That requires getting into the details of the threats, and if that discussion were held at the unclassified level it would be “virtually useless to anybody,” said Cox.

It’s not clear if or when the SWAC will hold unclassified meetings with industry, he said. “We certainly want to expand the aperture and include a lot of other new space folks that don’t have clearances,” he said. “I’ve just got to figure out how to make that interaction productive.”

The SWAC is a new organization championed by the chief of space operations Gen. John “Jay” Raymond to help define “how we’ll build and fight the future force,” Cox said. “We want to do that with greater fidelity than we’ve done in the past and by that I mean fidelity of the threat,” he explained. That means doing detailed analysis and digital modeling of what-if scenarios looking at potential threats,  the physical and engineering constraints associated with building satellites and the cost.

The SWAC analysis will be used to inform proposed requirements and funding.

After completing the first briefing on missile warning, the SWAC will look at hosting others on positioning, navigation and timing (PNT), and satellite-based communications.

Industry sources said the SWAC approach is significant because for the first time the Space Force will share with contractors the digital models used to simulate threats like anti-satellite weapons, for example. These sources said Cox met with executives from several companies in Colorado Springs last month during the Space Symposium to get feedback on how the Space Force can better communicate and share information with the private sector.

The Space Force will expect the industry to share its data with the government, Cox said at the AFA forum.

“Our hope is to transform the way we talk [about our models] and the language with which we communicate with industry. It’s not with colored glossy trifold coolness. But show me your model,” he said. “We want to change the language that we speak with each other.”

Contractors typically hear about what the Pentagon plans to buy through solicitations known as requests for proposals. The Space Force wants to shake that process up, said Cox. “My responsibility is to try to move industry involvement further upstream in that process at the concept development and the idea generation stage.”